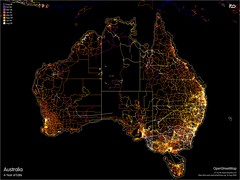 I just got back from a holiday in northern Australia.  Though it wasn’t an astronomical vacation at all (brought no scopes or astronomical meaningful binocs), I did get a chance to look up at a far more southern sky than I’m used to seeing.

The trip was a family vacation to tropical northern Queensland, specifically, Port Douglas and Cairns, so we were mostly between 16.5 and 17 degrees south latitude, definitely in the tropics, but not all that far south.

The first thing that I noticed was how high Scorpius is at that latitude.  It’s practically overhead, along with the teapot, with the Milky Way running pretty much between the two.  While shielding my view from the bright and numerous resort lights, the sky was still noticeably dark, which allowed the Milky Way to be so visible. What also stood out was a splotch of fuzz between the scorpion tail and the teapot spout, which is known as the open star cluster M7.  It was very bright, very noticeable with the naked eye.

After I got over my fascination of how high these summer, er, winter constellations were, I turned my focus to the unknown area just below Scorpius (would that be south or Scorpius, or maybe south west?).  It was entirely unfamiliar, and I knew that was a completely new area of the sky that I’ve never seen before.  That was a really cool feeling, knowing that I was looking at something I’ve never seen before, something I can’t see from home because it’s over and beyond my familiar horizon.

Checking the southern hemisphere sky map (thanks for sending it, Ed!), I realized that it was mostly Centaurus that occupied that space.  This constellation, according to Wikipedia, is visible only up to about 25 degrees north. Its two brightest stars, alpha (yes, *that* Alpha Centauri), and beta, which, btw, are unmistakably bright, point directly to Crux, the southern cross.  Crux is recognizable as a cross, and the “fifth” star of the cross that’s depicted in Australia’s national flag, though readily apparent in the sky, isn’t all that noteworthy. I would opine that it could easily have been left out of their flag and ensigns. I have to go with New Zealand (and a few others) on this one. 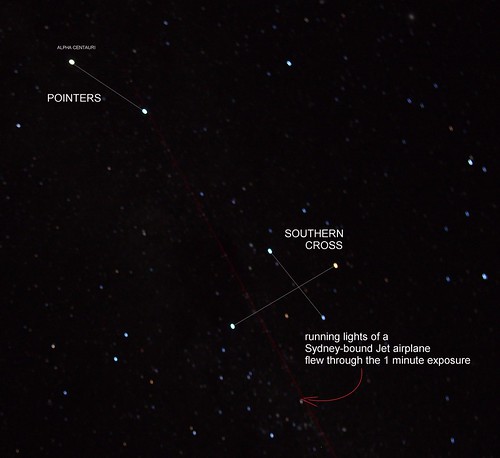 The other constellations I identified were the southern crown (Corona Australis) and Triangulum Australe.

After doing a couple of brief (ten or fifteen minute) naked eye observation sessions over a few days, I wanted to see if there was anyone local that I could meet up with to get a better tour, possibly a telescopic one, of the views from sixteen degrees south.  Turns out that there is an astronomy group in Cairns, but unfortunately, emails to their listed address went unanswered while I was there.

Of course I wish that I had brought some gear and prepared better for this visit to the south, but I have to remind myself that I went in knowing that this was not going to be an astronomy focused trip.  The scuba diving at the Great Barrier Reef, visiting the rainforest as far north as Cape Tribulation, and avoiding the pademelons, wallabies and kangaroos on the road at dusk kept me busy.  It’s a really interesting area of Australia to visit, where the rainforest meets the reef, as they say, and the lack of astronomy during this visit only gives me an excuse to go there again, perhaps further south, so that the Magellanic Clouds can also be bagged!