Observe The Sun Safely – Never look at the Sun without a proper filter!

The FixIt program had a very successful and busy session for Jan. 2013. Thanks for those who came out to help, Dave, Phil, Dwayne, Carl (I’m sorry if I missed anybody, short term memory isn’t what it used to be) The Houge Park hall was buzzing with activity from opening to closing.

We had 2 people bring in Newtonian scopes on equatorial mounts. One needed help on learning how to use the goto function and the other one needed help assembling the scope and mount that he had bought from Orion . I helped him assemble the scope and mount and showed him how to use. I did see him bring it out to the Star Party at HP so it’s good to see him using it and helping out at the star parties.

Phil and Dave had a chance to look at the recently donated Meade LX6 SCT and confirmed the declination motor does indeed work – I believe it is the clock driven azimuth motor that does not. This old LX6 will require someone with specialized skills and the luck of obtaining parts that most likely are no longer available to be able to repair it.    Even so, I don’t think it is in the best interest of the club to expend the time and energy to do so. The front collector plate does have a haze which could possible be cleaned but is best left to the buyer to do so. As Dave has said before, what is unique and desirable about this scope is that it is a F6.3. Dave and I did a star test on the scope last Fri. night after the star party and confirmed that visually the scope is good.

We also finished putting the locking hasps on the 2 bookcases that Dave and I put together over the Christmas break. So the SJAA library is ready to go!!!

SJAA is proud to announce a new benefit for it’s members.   We are now providing a listing service to assist you in selling your astro gear.

All you have to do is provide me with a picture (or pictures) of the item, a description (a lot of detail is best), a price you are asking, the terms of the sale (cash only, etc), and how you wish to be contacted.

We will then post this information up on our Member For Sale Listing page (link on the right side of this page).   Please notify me should you want to make changes or remove the item.

And don’t forget to check out the items the club is selling via the links on the right.

The Silicon Valley Astronomy Lectures at FOOTHILL COLLEGE are back after a year of remodeling! Sponsored by NASA, The Astronomical Society of the Pacific, SETI and the Foothill Astro. Dept., the public gets to hear from Nobel Laureates and the top researchers of our 11 dimensional universe we now call home. To get on the mailing list for up-coming lectures follow this link: 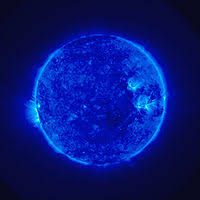 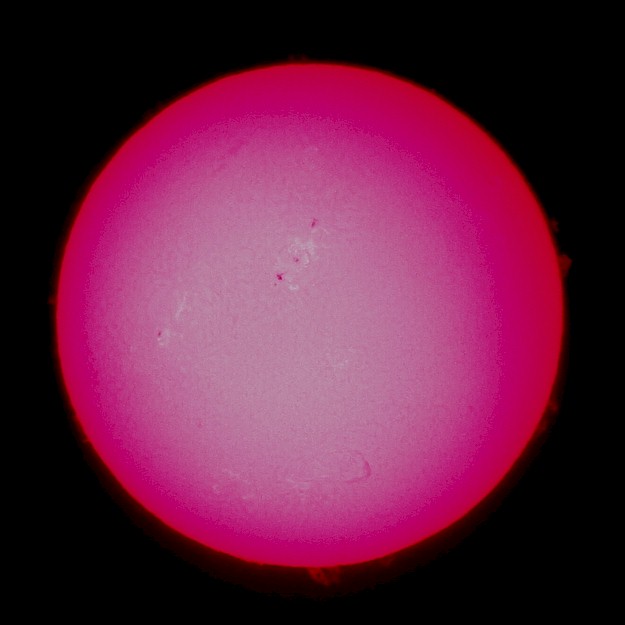 El Sol is “stellar” right now. The sunspot group at center is 1x with solar glasses (so get your money’s worth and check it out). The discerning eye will note it does not look like a point but spread out diminishing to upper left (from a non-telescope CA  perspective}. 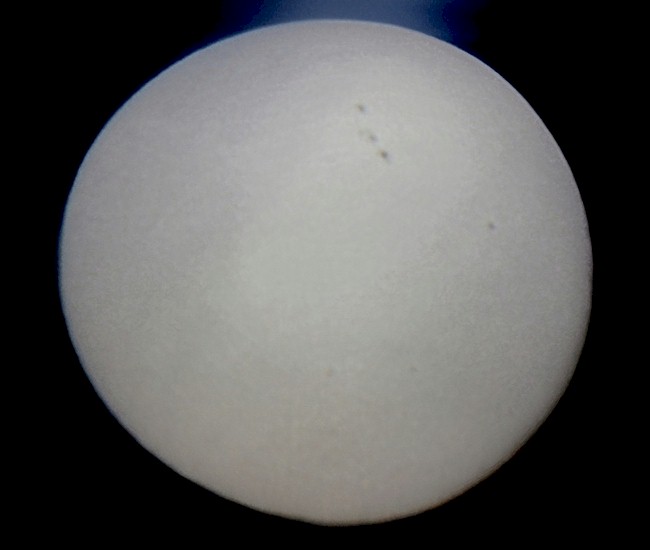 In h-alpha or standard filter the group is wicked with notable plage, pillage and turmoil.

Flares are kicker – the 6 O’clock is a looper – angled toward earth – so drapes onto the solar sphere from our perspective… 2 large prototypical loops are at 4 oclock and further up. Flares are all around the sun with most extending 6 white dwarf diameters (ie earth diameters) from the photosphere – the “surface” of the sun.

Taking an off axis shot with your point and shoot can giveyou better sunspot contrast & detail: 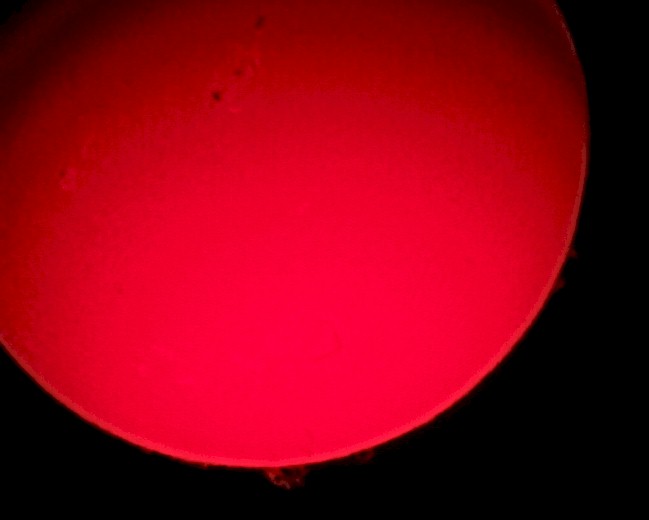 Dedicated Astronomers hang out till all hours of the night in freezing weather …. 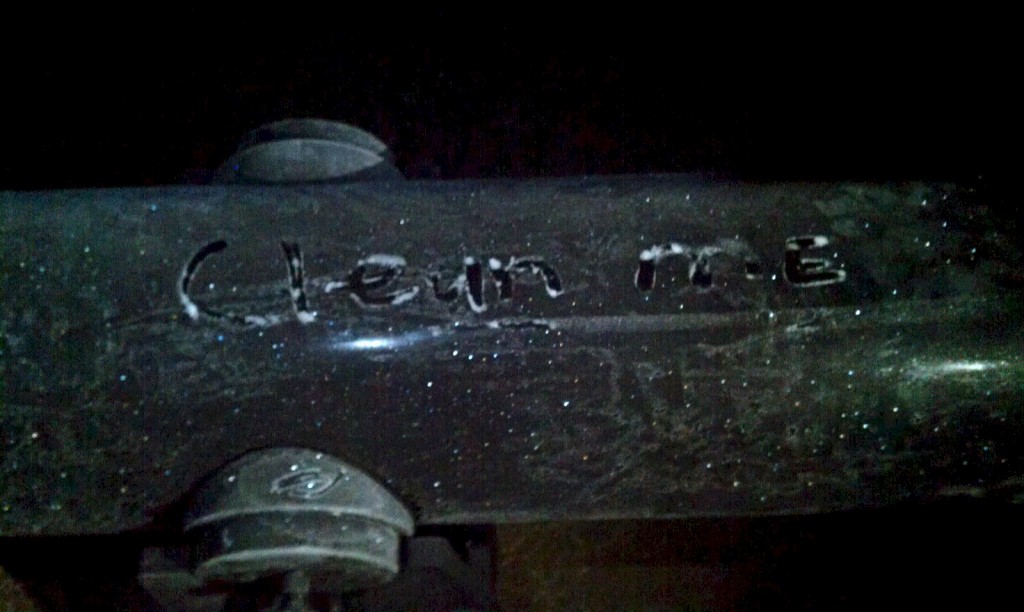 We’re at the start of another cycle around the sun, and this is a good point in time (and space) to look back over the past cycle to see what’s been going on with the San Jose Astronomical Association.

The Quick STARt program (the former Mentoring Program) helps to ease folks into amateur astronomy. You have to admit, astronomy can look exciting from the outside, but once you scratch the surface, it can get seemingly complex in a hurry. But it doesn’t have to be that way if there’s someone to guide you and answer all your seemingly basic questions.  The Quick STARt program really took off in 2012 with the leadership and energy of Dave Ittner.  He has already helped dozens and dozens of people get their feet wet in getting out under dark skies to discover what’s out there, firsthand.  Over the year, Dave has also refined the program , adding not only easy to use Dobsonian telescopes but all the accessories any good observer needs, such as observing chairs, appropriate eyepieces, sky atlases, accessory cases, etc.  The Quick STARt program is available to SJAA members, and you can find more information, including how to contact Dave to sign up, here.

Another program that was conceived just before 2012 but has really taken off is the Solar Observing program. Early in 2012 the club took receipt of a Lunt h-alpha 100mm solar telescope.  Since then, it’s been the star (!) of the party at every daytime event.  The core of the Solar Observing program is the monthly observing sessions at San Jose’s Houge Park.  On the first Sunday of every month, from 2 to 4PM PT, SJAA members set up the club’s Lunt for the public to come view our nearest star. Additionally, members bring their own solar telescopes, such as Coronado PSTs to projection systems, with which to compare views. Of course, sometimes the weather doesn’t cooperate and the session is canceled, but in those oftentimes when we do set up, the sun provides an amazing show. In fact, the sun is approaching the solar maximum, which means lots to see on and near the sun.  Michael Packer runs the Solar Observing program and has proven a dedicated sun watcher!  (Remember: NEVER observe the sun without proper eye protection! You can go blind!)

A program that is entirely new for 2012 was the Fix It session, sometimes called the Tune Up or the Telescope Fix It program.  This is a real simple service the SJAA offers to members of the community, though it’s priceless.  The Fix It session provides a place for people to come with their telescope or other astronomy gear problems.  Every first Sunday of the month, from 2 to 4PM (coinciding with the Solar Observing sessions), several SJAA members make themselves available at Houge Park for people to come with their scopes to get help with their gear. It can be any type of issue, such as broken scopes whose owners need advice, help with collimation, or even a quick session on how to use it. Weather doesn’t slow this program down, so even if it’s windy, cold and rainy outside, Fix It day goes on.  Big thanks to go Ed Wong and Phil Chambers for being the gear experts who faithfully make themselves available at Fix It day!

Another new program that debuted in 2012 is the Astro Imaging Special Interest Group (SIG).  This was spearheaded by Harsh Kaushikkar and has a mission of bringing together people who have an interest in astronomy imaging, or put more simply, taking pictures of the night sky.  The Imaging SIG meets roughly every other month at Houge Park to discuss topics about imaging, as well as in the field, usually at Rancho Cañada del Oro (more on that site later). The SIG is open to people with absolutely no experience but want to learn what it’s all about, but experienced imagers are also more than welcome, indeed, encouraged to participate.  The best way to get involved is to review the postings on the SJAA AstroImaging mail list in Google Groups. Here’s the link.

The SJAA has been working with the Santa Clara County Open Space Authority (sometimes called simply the OSA) to make one of their sites available to astronomers.  The OSA’s Rancho Cañada del Oro (sometimes called RCDO, or Rancho) site is made available more and more with the dedicated work of SJAA members Chris Kelly and Dave Ittner. Both are also docents with the OSA, which really makes the partnership between the two organizations that much more cohesive.  If you are interested in experiencing a fairly dark site that’s not too far from home, consider coming out to Rancho when it’s announced it will be open. Located just south of Calero County Park, between San Jose and Morgan Hill, Rancho gets surprisingly dark for being so close to an urban area.  Keep an eye out on the SJAA Announce mail list for notifications of when it will be available.

There were many more accomplishments during the year for the SJAA, and this post could go on and on about them. But before we get too long winded, let me make a few, more brief acknowledgments.

There is more, indeed, but these many items are the highlights. The board and the active volunteers have plans to make 2013 just as active, lively and fun. I hope that if you haven’t been getting involved, you will consider doing it soon!  Come to Houge Park, or contact any of the board members to participate!

Deep Sky Observing is a blog site maintained by Mark Wagner one of our distinguished past presidents.

It is an archive of what fun it is to get out and enjoy the aesthetics of amateur astronomy. The sights are beautiful, inspiring, and fire the curiosity in the sciences, theology and philosophy. It is a mind expanding experience.

The night sky away from the brightness of an urban setting is a sight of natural beauty… a resource to protect, like our parks and waters. Just as viewing the Grand Canyon never disappoints – so does the night sky – its is humbling and awe inspiring, and truly the grandest canyon of all…

SJAA has accumulated a lot of scopes and accessories over the years.   We now have too many items and too little room so it’s time to offer them up for sale.

I found it best to break them out into one of three categories – Telescopes, Eyepieces, or Misc Items and put them on their own separate page here on this blog. The links to these pages can be found to the right of this post.

These items are offered up as is and on a first come first serve basis.  Should an item not yet be priced it will be shown as $TBD.   Feel free to offer a price for us to review and then either accept or counter.

I would be glad to answer any questions you have and or show you the item of interest by setting up a time to meet at Houge Park.

Please check back periodically as we have many more items to list (will be added to the bottom of each post).