Last night I joined Ed W, Bharath K, and Nham N out at Coyote Lake.  Those guys were doing some imaging while I was playing around with some recently purchased used equipment (Orion Deluxe 100mm Refractor and a William Optics EZ Touch Alt Az head and tripod).   We all set up at the end of the road down by the dam.   It was a very nice night – no wind, temperature was just right.

But what is interesting is that the light by the boat ramp continues to be off.   So this appears to be a potential spot to start using again.   Ed did get a phone # for the main office to call.   He hopes to get the story on the light.
It is my suggestion to start using Coyote Lake on nights that Rancho is not open.   Please set up at the boat ramp paved lot and let us know about your experience.
Here are the directions:
Take 101 South
Take the Masten Ave exit and turn left going back up and over the freeway
Turn Right onto Center Ave
Turn Left onto Rucker Ave
Turn Right onto New Ave
Turn Left onto Roop Road
stay on Roop Road for many miles as it twists and winds up into the hills
then Turn left onto Coyote Lake Road and follow it to the Ranger station, pull in on the right to the pay booth.
Pay $6 and then continue on to the Boat Ramp or to the Dam.
Regards,
Dave Ittner
Posted in Articles, Blog, Trip Reports

My wife and I went on a tour of Australia in November 2012 with MWT Associates, Inc. (Melita Wade Thorpe) Melitatrips Travel specializing and Astronomical tours.  This is our 4th tour with them and actually the least enjoyable because it was one of the largest tours they had ever put on and coordination had something to be desired.  Until this trip we had nothing but praise for their service.  I guess the lesson is not to take large tours.

The highlight of the trip was the eclipse of the sun on November 14, 2012 on Green Island:

We arrived at Green Island from Cairns by ferry at about 2:ooam to find a spot and set up.  It was dark but we had all brought flashlights so we could more or less find a good spot along the narrow beach.  When we arrived the tide was out and the coral beach extended out for about 75 yards.  By the time we left around 7:50am the water was literally lapping at our feet.

Stills and video shots of the Total Eclipse of the Sun were taken from Green Island Australia on November 14, 2012. Though there were clouds in the sky the majority of the eclipse was relatively unobscured by them. We later hear that those who stayed in Cairns Australia about 25 miles from Green Island had cloudy weather that obscured the view of the eclipse. There was a 50-50% chance of cloud cover for Green Island. We lucked out. The eclipse started about 5:45am, entered totality at 6:38am, and ended at 7:40am local Green Island time.

I brought with me a Nikon D5100 SLR using a 55-300mm lens with a sun filter and a Panasonic V500 camcorder and two cheap and light weight tripods.  I really didn’t have any experience taking eclipse photos at the time.   The earlier half of the eclipse photos were taken in auto mode where the shutter speed was about 1/30 sec. so images were slightly blurred due to shaking while pressing the shutter button.   The later darker images were taken in manual mode with 1/1000 shutter speed and are much sharper.  I took about one photo every 5 min. and at totality switched to my camcorder.  The tripod movement was jerky so it was difficult to keep it steady while taking photos and videos.

I was so busy taking photos that I really didn’t get a chance to enjoy the eclipse as did my wife.  I didn’t really see how dark it got at totality though my feeling is that it was like being under a shade.  It didn’t get really dark like in some eclipse where the moon is closer to the earth.  The YouTube below is the results of all my efforts as a beginner.  You can see some of the clouds that passed by.  There was a short period that the sun was almost half obscured by clouds.

Heads up to all volunteers, sun worshipers and outreach/communication specialists!  The San Jose Astronomical Association will again, for the fourth year in a row, bring astronomy and science directly to the people.

On Sunday, 25 August 2013, I and a few volunteers will be at the Camden Community Center in San Jose, not far from SJAA basecamp, Houge Park from 11AM to 4PM.  We will have the SJAA’s 100mm h-alpha scope set up, as well as a few others, including an SCT with a white light filter, and we’ll use those to provide views of the sun to passers by while chatting them up about the SJAA and all things astronomy.

If you would like to participate, please contact Rob Jaworski at rob.jaworski at sjaa.net. There are no requirements, no prerequisites, no restrictions.  Just let us know so we can expecct you!

Observe The Sun Safely – Never look at the Sun without a proper filter!  Solar Programs are held 1st Sunday of every Month 2:00-4:00 PM at Houge Park   weather permitting

Today the International Sunspot Number (SN) was 76 based on 24 stations whie NOAA’s, which always rings in higher, was 104.

Carl Reisinger had a beautiful duel scope setup today with one housing a Baader Herschel Wedge and green filter and the other holding Seymour front end filter. We counted the centered 4 major sunspot groups plus 17 sunspots – giving a SN of 57. 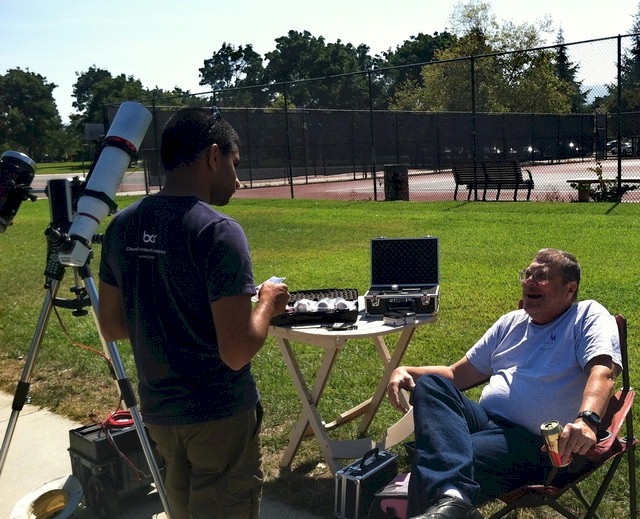 Madhusudan (Left) and Carl (Right) chatting next to his cool duel setup. It tracks the sun allowing one to up scope magnification to count sunspots and get very good views up the penumbra around sunspot centers. Nice areas of Plage (active regions) were seen today.

If we included the group at the edge (see below image) than our SN woud have been 67. If we correct this count for using a 4-inch scope and account for weather (predominately thermals) than we get a SN number nearly spot on with the International Sunspot Number. Unlike NOAA’s count, The International SN stays true to the historical data and method invented by Rudalf Wolf to log daily SN: 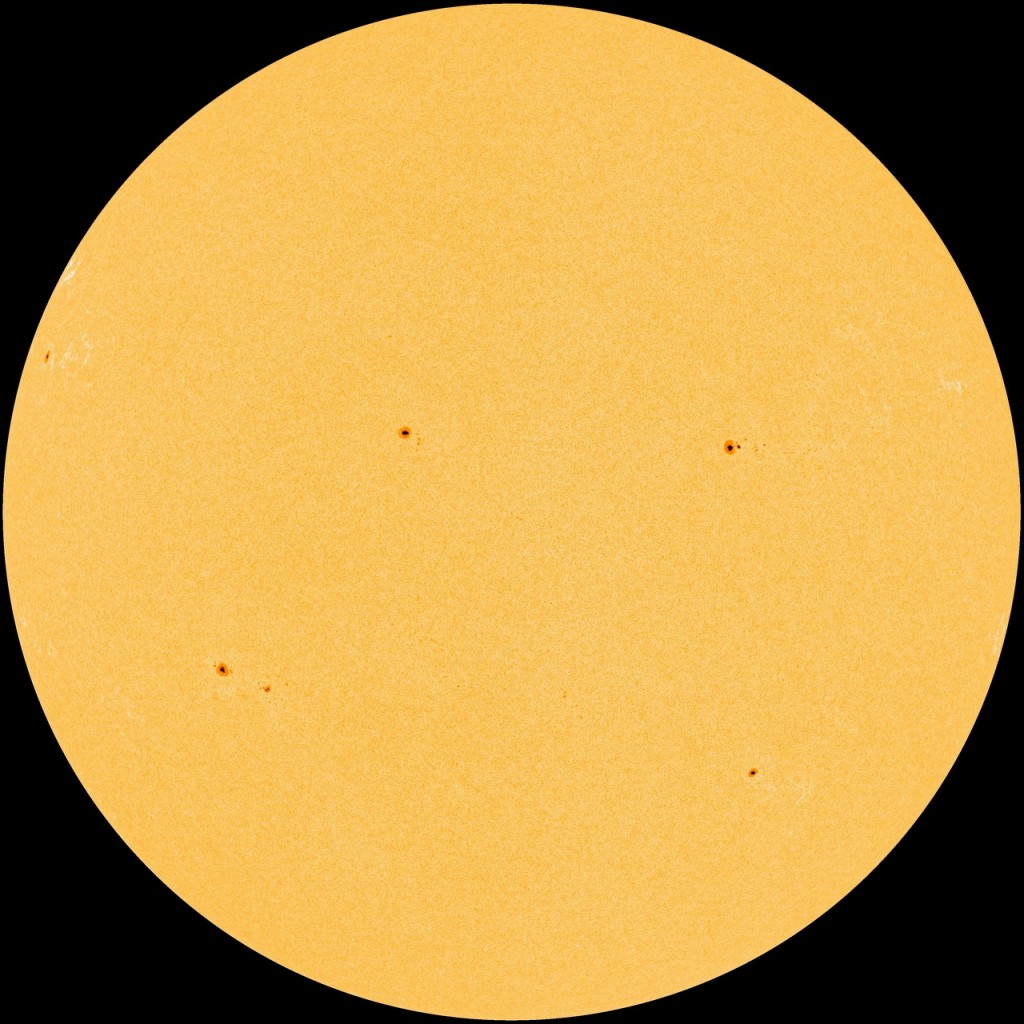 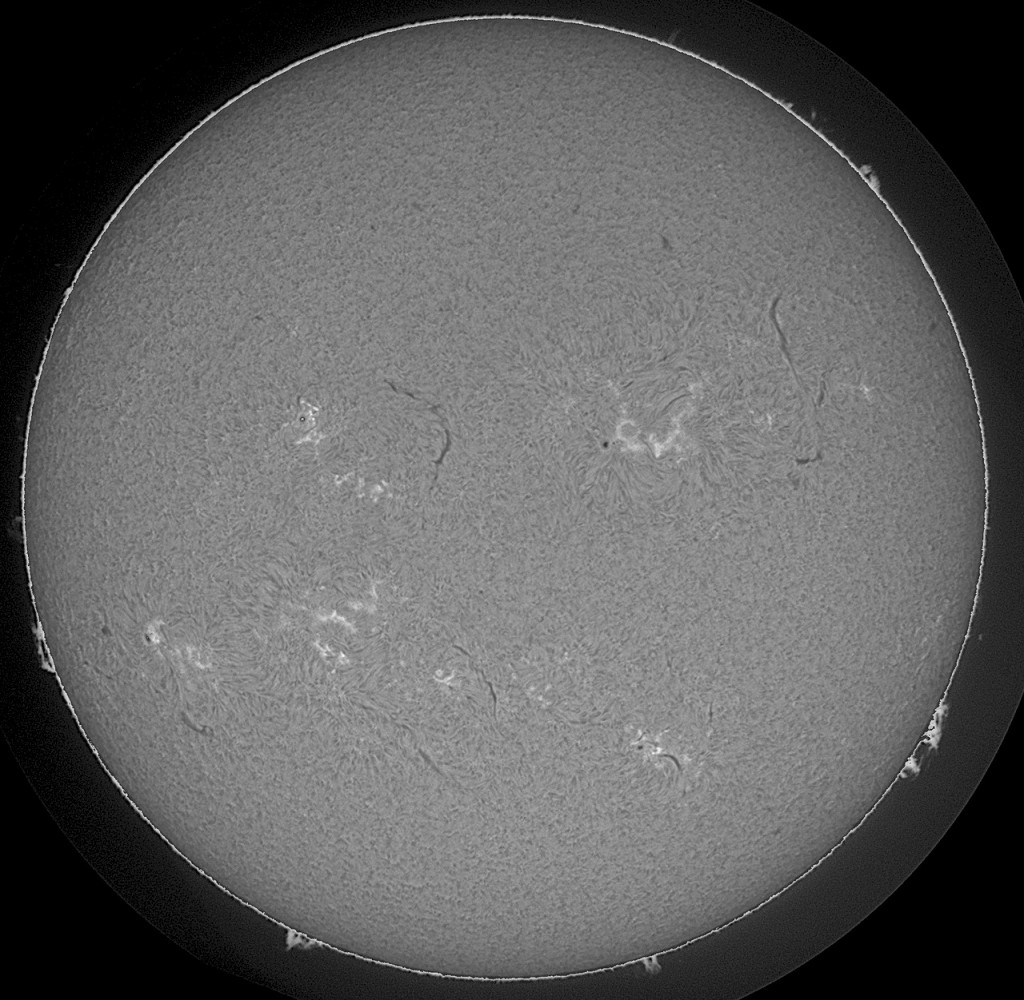 Gabre Gessesse hung out with us today and as usual, we had a nice crowd of folks and families who stopped by: 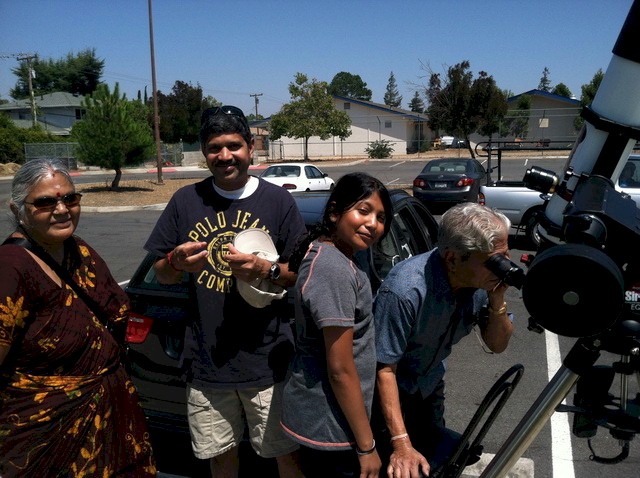