Michael Packer
Observe The Sun Safely – Never look at the Sun without a proper filter!
Solar Programs are held 1st Sunday of every Month 2:00-4:00 PM at Houge Park  weather permitting
Some SJAA solar folks decided to share some solar views on Saturday July 25th at a new spot – Campbell Park. The beautiful park is not only located near bustling Campbell Ave, it lies along the Los Gatos Creek Trail and so gets a steady stream of passers-by. Not unexpectedly parking is a bit harder to find but we had a good 75 kids and adults stop by and take a look. 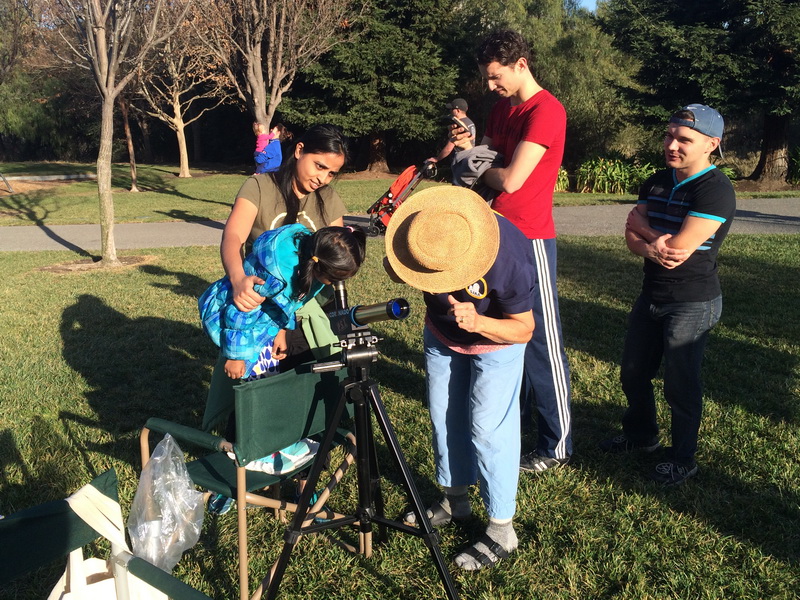 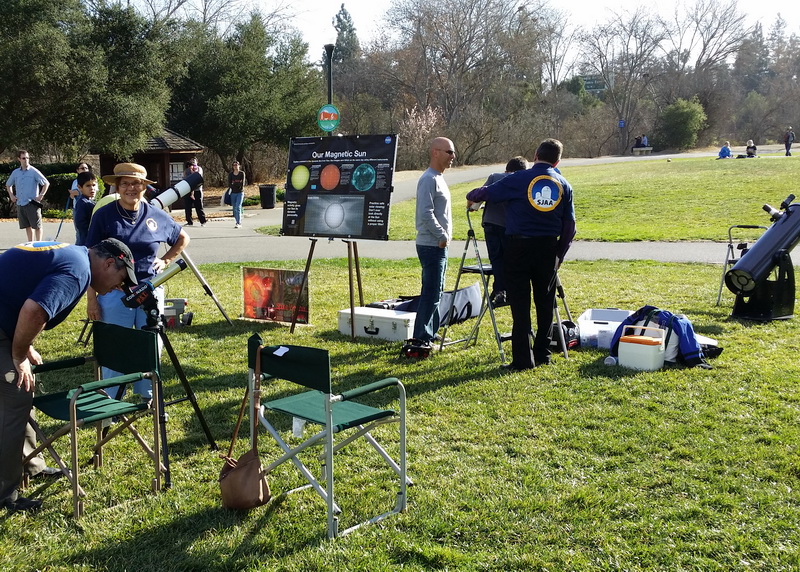 The above pic is where we staked our spot. Terry’s looking at the camera and Michael Packer is taking a look through her scope. Kevin Lahey can’t often observe on Sunday so this was a treat for him and the public to look through his 10-inch canon of a scope equipped with a filter: 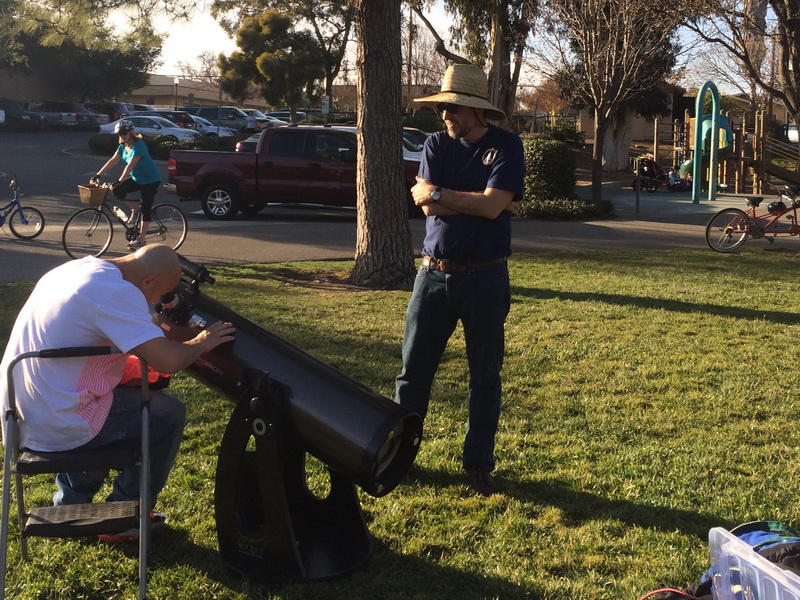 This scope details sunspots something wicked and the number of active regions on Saturday did not disappoint with 150 total (NOAA): 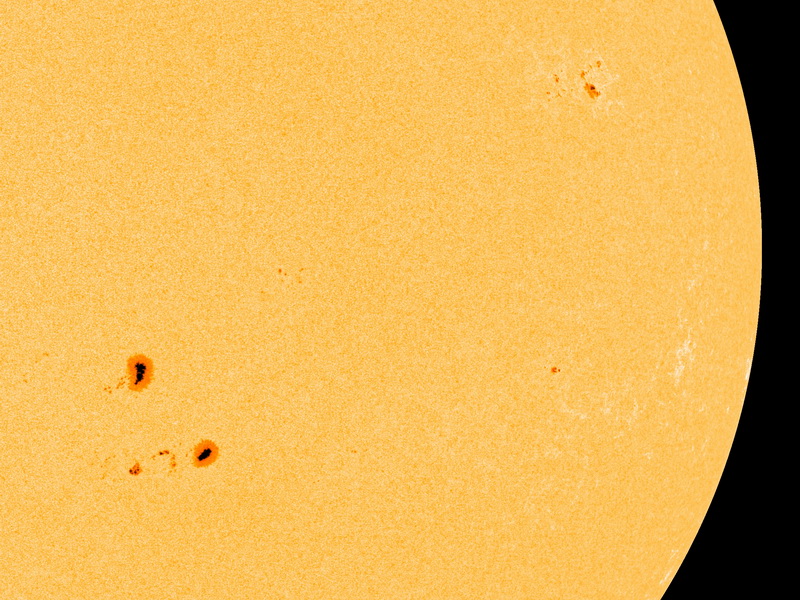 These spots were definitiviely interesting in a grab and go scope such as Bill O’Neil’s C5 (below). Much thanks goes to Bill for also bringing an excellent NASA poster of sun mounted to an easle. This really helped the public/kids get what they were viewing in all the scopes. 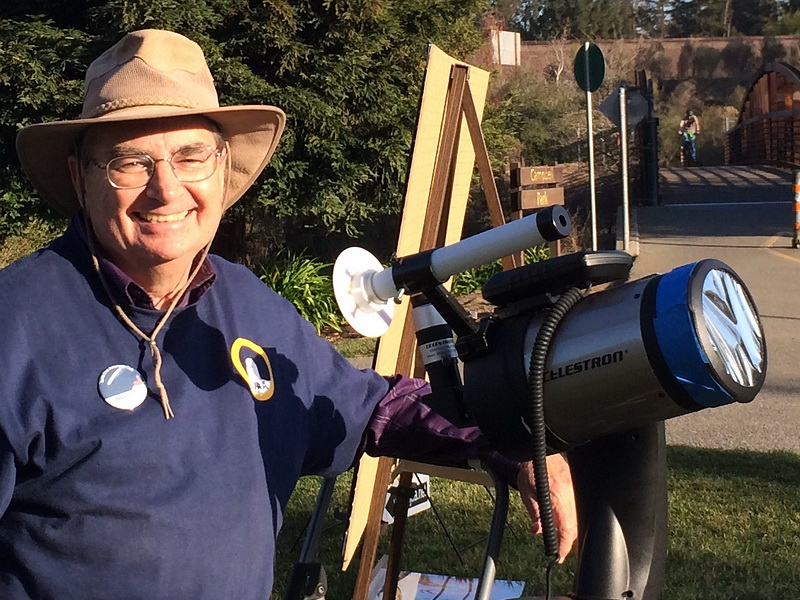 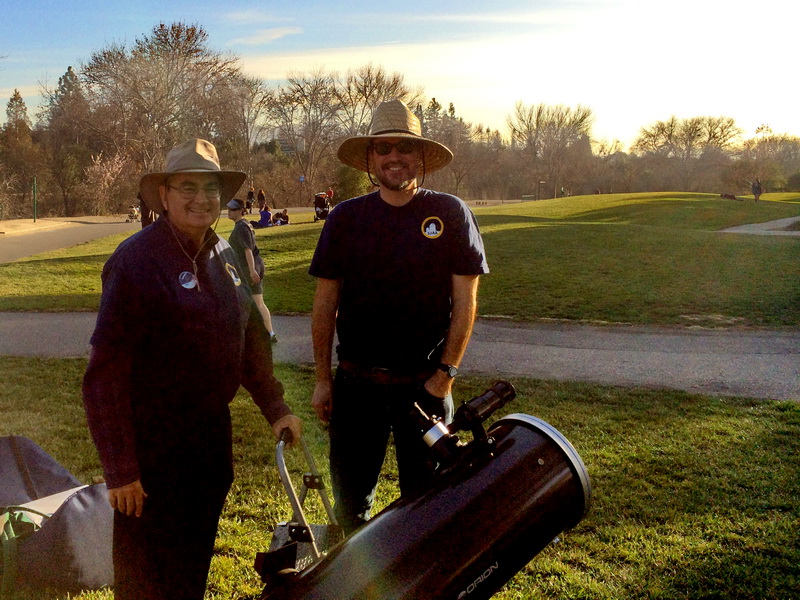 Though parking was a bit of an issue at Campbell Park, sharing the views with trail and park goers more than made up for the little extra work and we’re open to observe here again. Stellar cheers and mag. -26.74.

First In-Town Star Party of the Year Was a Blast

On Friday night, 03 January, I was scheduled to both open and close for the first in-town star party of the year. Being early January, the weather had been hazy all day, and though it was cold, it wasn’t arctic, so not bad enough to cancel.

I arrived at Houge Park about 15 minutes before the official start time of 7PM. It was already dark, and as expected, there were scopes already set up. As I parked and got our of my vehicle, a man and his son asked where the star party was going to be held. I pointed him to the row of scopes lined up near the tennis courts, then led the two of them over there and began introducing them to everyone. We had Paul, Richard, Gary and others already set up, pointing at Jupiter or the Pleiades.

Throughout the night, members of the public came and went. Some came with just the family and a healthy curiosity, others came with family and complete with a scope to set up. All told, we saw about seven scopes set up and perhaps 35 individuals stream through. That’s not a bad count, given the conditions and time of year.

One celestial phenomenon that repeatedly caught people’s attention was the fact that Jupiter’s four Galilean moons appeared to be moving quickly. Indeed, there were two that were approaching the gas giant from opposite sides, appearing to be ready to hit the disk at nearly the same time. A quick look at an app on my smartphone, an app called Where is Io, showed that indeed, Io and Ganymede were approaching and both would duck behind the planet’s disk.

Io winked out as expected, and since Ganymede has a longer orbital period, it took a few minutes longer for it to near the limb of the disk. As it neared the disk’s edge we were fascinated with a visual sensation that the moon was pushing into the planet, flattening it out. But as the seconds, then minutes, ticked by, we began to realize that instead of retreating behind Jupiter, the moon was moving in front of it. Either my app was incorrect, or it was simply difficult to tell in the app, with its small image on a small cell phone screen. As the Ganymede’s image pushed further into the disk of Jupiter, several of us observers detected a faint 3-D effect, where the moon stood out from the disk; apparent depth perception. We determined this must have been an artifact of the moon’s shadow being so close to the image of the moon.

Wait a minute, I thought. Didn’t the opposition of Jupiter just recently pass, perhaps in December? I turned to Sky Safari Pro, also installed on my phone, called up Jupiter for the current time, and read through the details. Opposition, it said, was scheduled for February 2015. Hmm, it must be referring to the *next* opposition. I rewound time in the app to August 2013 then looked at Jupiter’s stats once again. Aha! Opposition is predicted to be 5 January 2014, less than 36 hours of our current time! No wonder Ganymede’s shadow was so close to the moon! What we astronomers more typically see is the moon well away from its shadow, so this was certainly an unexpected treat.

Our night at Houge Park in early January again demonstrated that amateur astronomy is not some placid, dare I say, boring pastime.  Rather, it’s unyieldingly dynamic, things are always happenning, and being on the front lines at any given moment allows you to see the universe in action, even from our own little corner of the solar system, galaxy, or universe.  From happy surprises provided by local planets to unexpected releases of massive amounts of energy, local or millions of years ago, getting out under the stars, day or night, is a constantly fulfilling endeavor that never fails to amaze.  This is astronomy.

For your edification and pleasure:

Astronomy theme and local-arts play – what could be better? 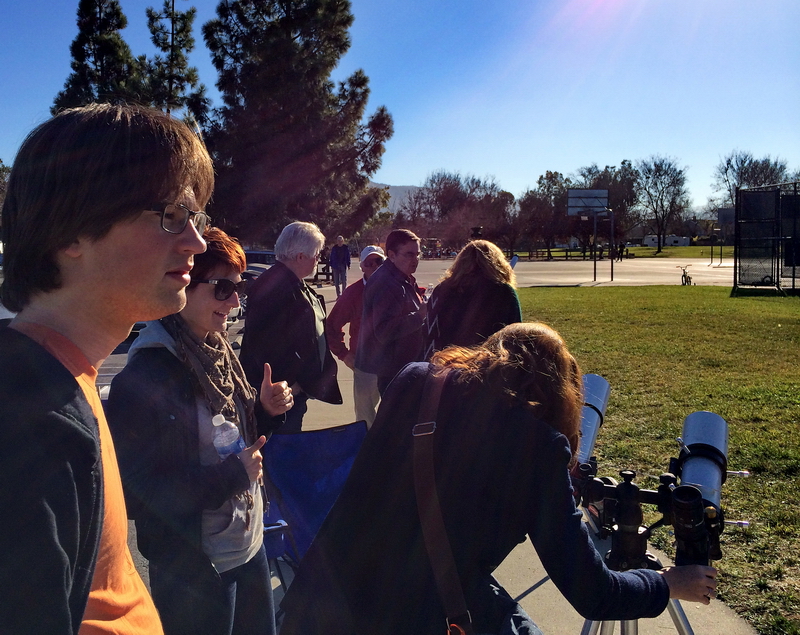 SJAA and Public checking out the Sun.
Thanks to Terry Kahl, Bill O’Neil, and Teruo Utsumi for setting up gear.  It was also nice to meet up with folks from The Villages Astronomy Club, recent member Ashref, also Mark Farley, Mikhail, Alena and the some 50 plus public/astro folks who stopped by.
There was a huge Sunspot on El Sol this Sunday visible with just a pair of Solar Glasses. Under the telescope it was exposed as a huge network of spots around 2 massive spots – each showing intricate penumbral detail: 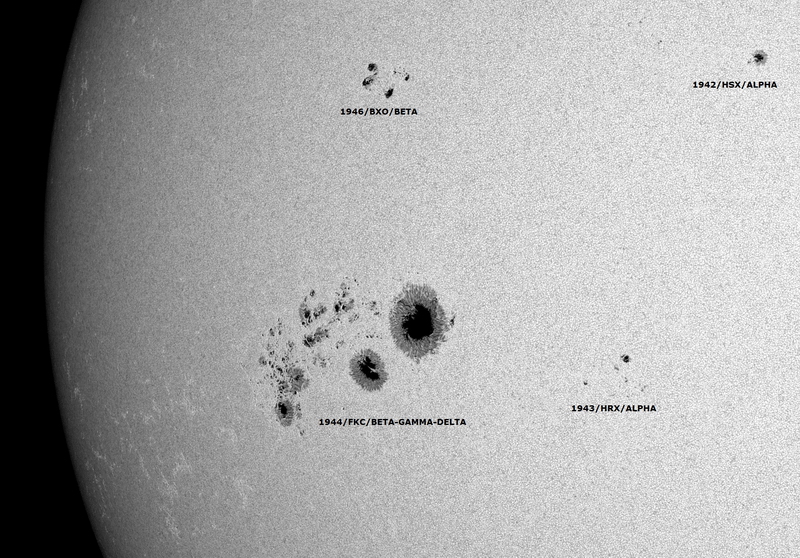 This Sunspot group is the origin of the recent flare reports or CME (Coronal Mass Ejection) reports that have made the news. H-Alpha View did not disappoint as seen here by pic from Robert Duvall. Look at the huge vortex flow around the largest sunspot. Prominences or H-Alpha flares emanating from this region can be seen in the image as filaments or cloudy looking wisps: 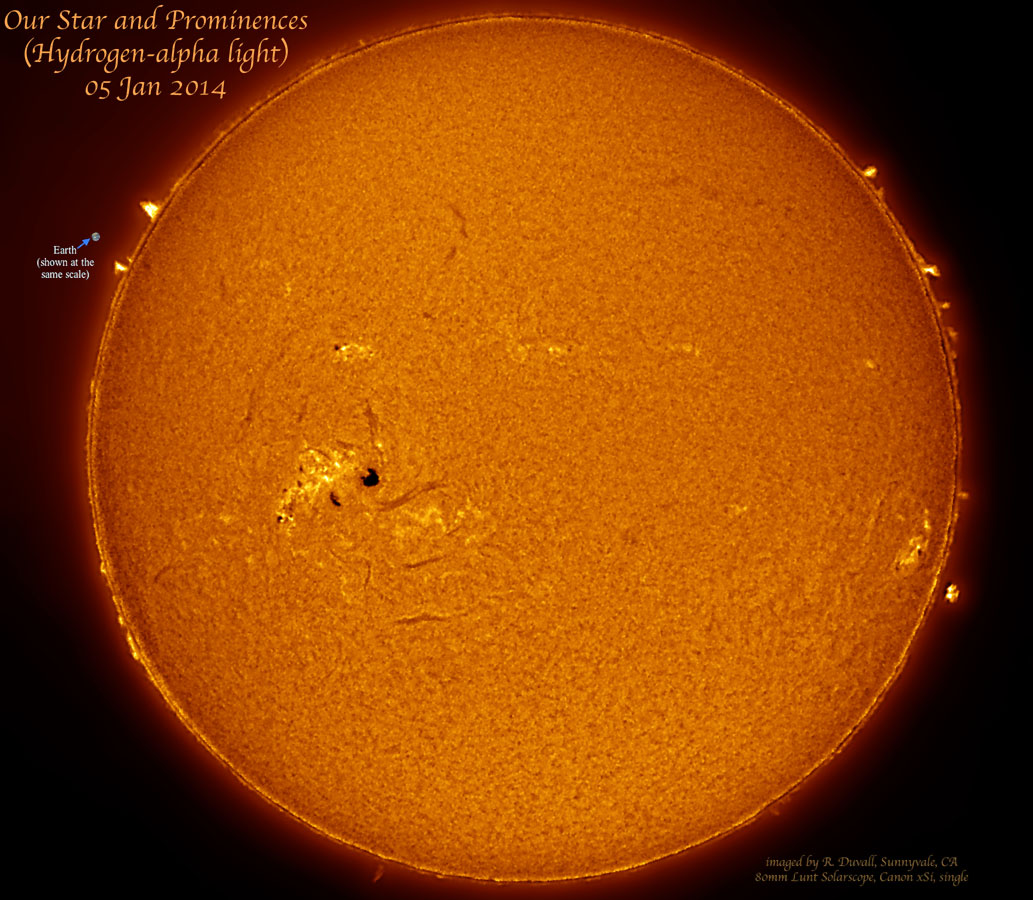