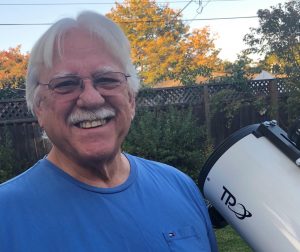 Gerry smiling happily with his hobby.

SJAA President and friend Gerry Joyce passed away recently. Gerald James Joyce (Gerry) was born on November 2, 1945 and passed away on May 20, 2020. He was 74 years old.

Gerry was born in Long Branch, New Jersey, the youngest of four boys and the son of Norwegian immigrants Frank and Ruth Joyce. After a three-year stint with the Navy, he married his first wife, Nancy, and began a 50-year career in computer technology. Over his lifetime, Gerry worked with both large and small companies, but had a particular “soft spot” for the challenges of startups. He was an innovator in the early days of computers; his natural curiosity, thirst for learning, and tenacity took him through many phases of his career.  His entrepreneurial spirit brought him to California in the late 70’s. In 1999 he married Priscilla Dutton, and on November 6, 2019 they celebrated their 20th anniversary in Kauai, Hawaii. Gerry and Priscilla traveled extensively, including a trip to Norway to reacquaint with relatives. In 2004, he started his own company, Viking Systems, to design and install all forms of home automation. He sold Viking in 2016 and retired.

During the last four years, Gerry was able to pursue a life-long interest in astronomy and astrophotography. In early 2020 he became President of the San Jose Astronomical Association. Prior to that, he had also served as the Vice-President of SJAA from October 2019 to March 2020. His excitement was contagious – he was always on a mission to interest everyone – from grandchildren to casual acquaintances – in the wonders of the sky. SJAA enriched Gerry’s retirement years immeasurably, and he made many dear friends during his time with the club.

If you would like to share any memory or thoughts or pictures of Gerry with the rest of the SJAA community, please do so in the comments. All messages will be shared with Gerry’s family.

Gerry with a collection of SJAA folks February 2020.