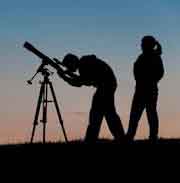 In the Nov.8 1954 issue of the San Jose Evening News, columnist Dick Barrett ran a small article asking “Any Amateur Astronomers?” at the behest of William Weller.  The item brought a positive response.

Weller called the first meeting at Herbert Hoover Jr. High in San Jose, on December 6, 1954.  Twenty people were present.  A member of the Peninsula Astronomical Society spoke on astronomy clubs, then gave a discussion of the two main types of astronomical telescopes, listing the advantages and disadvantages of each.  Next, Dr.Eggen of Lick Observatory spoke on “The Star of Bethlehem”, listing various possible astronomical explanations.

The meeting was a success, and the time and place for the next meeting were decided.

By May, the first Board of Directors and officers were elected, and by August 26, Articles of Incorporation were written and submitted to Sacramento, bringing the club into legal existence.

Jump to October 1978, when the name was changed to “San Jose Astronomical Association”, at the suggestion of past-president A. Boris Gregory.  His concern was that the word “amateur” is often interpreted in a negative way, as in “mere amateur” or “amateurish”.  That may well be the public’s impression, but it’s not always correct.

Consider that Galileo and William Herschel were amateurs; the former was a college professor and the latter the music director and organist of a church in Bath, England.  Albert Einstein was a patent inspector when he wrote his papers on special and general relativity.   There are many other examples.

Over the years, the SJAA has met at schools, city parks, colleges, libraries, as conditions permitted.  The move to Houge Park is the newest of those, in May 1995; though Houge had been used for public star parties from April 1992.

Many years ago, the calendar on the first page of our newsletter was marked “Ephemeris”, to mean a table of coming events. One day we received a request from the librarian at NASA/AMES, asking for certain month’s issues of the “SJAA Ephemeris”. That’s how it came to be named that; before, it had no actual title.

There is (or was) a club in Arizona, Prescott, I think, that also names its newsletter “Ephemeris”. Put out by an ex-SJAA member!