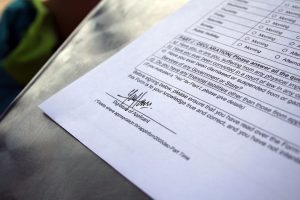 At the board of directors meeting, July 2017, the board voted to amend the bylaws. This kind of move is not done very often, and great consideration is made before such an idea is even brought to a vote by the board. However, given the history of the types of memberships with the SJAA, and also some recent moves made by the City of San Jose, the board deemed it prudent to amend the bylaws to remove the option of offering youth or student memberships, and to stipulate that only people age 18 and above are able to apply for membership.

Over the past seven or eight years during which I have been on the board of the SJAA, I have served as membership chair at least twice. Also, at every board meeting each month, the membership report lists all those individuals who have applied for new or renewing membership. Plainly, there is a good amount of visibility of the member rolls. During those years, I have seen not more than a small handful of members who applied via the student/youth membership. The number has been, at most, in the single digits.

Recently, we have seen the City of San Jose put forth some requirements which could be quite burdensome to SJAA volunteers. In the recent requalification process that the City required of its reuse partners (of which, SJAA is one), it called for all volunteers or employees that has direct contact with minors to have background checks run, TB tests completed, fingerprints taken, and all the other things that typically come with interacting with children. On the face of it, everyone in the club that shows up to In Town Star Parties or Solar Sundays, or any of the myriad events that the SJAA hosts at Houge Park, could be considered a volunteer that has potential interaction with children. It would be too much to ask of SJAA volunteers to agree to such a requirement, and it could potentially put the events at Houge Park at risk.

Upon further research and investigation, the board concluded that although the contract with the City does not provide a definition of direct contact, generally, volunteers of SJAA do not have direct contact. Rather, SJAA volunteers have incidental contact with minors. Kids may show up to SJAA events with their parents or guardians, but SJAA volunteers never take custody of or supervise them, such as in an afterschool or day care environment. The conclusion was made that since no one that is associated with SJAA ever has direct contact with minors, the organization is exempt from such requirements.

To further solidify the fact that SJAA does not provide care, supervision, guidance or control of minors in any way, the board thought it prudent that minors be prohibited from becoming members in the first place.

The board does not believe that these changes to the bylaws will have any impact whatsoever to its members, now or in the future. SJAA will recognize the benefit, however, of not being potentially held to onerous requirements of its volunteers, nor will there be any question about the club’s relationship to minors. The club certainly encourages kids of all ages to learn more about astronomy and the sciences and to come to club events, and SJAA will continue to support kids’s desires to learn more, or to just look at Saturn through a telescope. But please, do bring a parent or guardian!