Movie Night was a hit!  Double feature, popcorn (all you can eat!), lemonade and other refreshments made for a wonderful evening.

The SJAA recently took possession of a brand new, larger, wall mounted projection screen and it was being mounted at the front of the room.  The idea was to replace the freestanding, square, smaller and 1960s vintage screen that had served well for decades.

The screen installation crew, consisting of long time SJAA’er Mark Wagner, Mr Can-Do Dave Ittner, and go-getter Jose Marte, ran into some early technical troubles. But nearly everyone in Silicon Valley being or having engineer leanings, those troubles were quickly and creatively solved so the job could be completed in time for the screen’s first light, the SJAA’s first ever Movie Night, which was this month’s manifestation of the General Meeting. 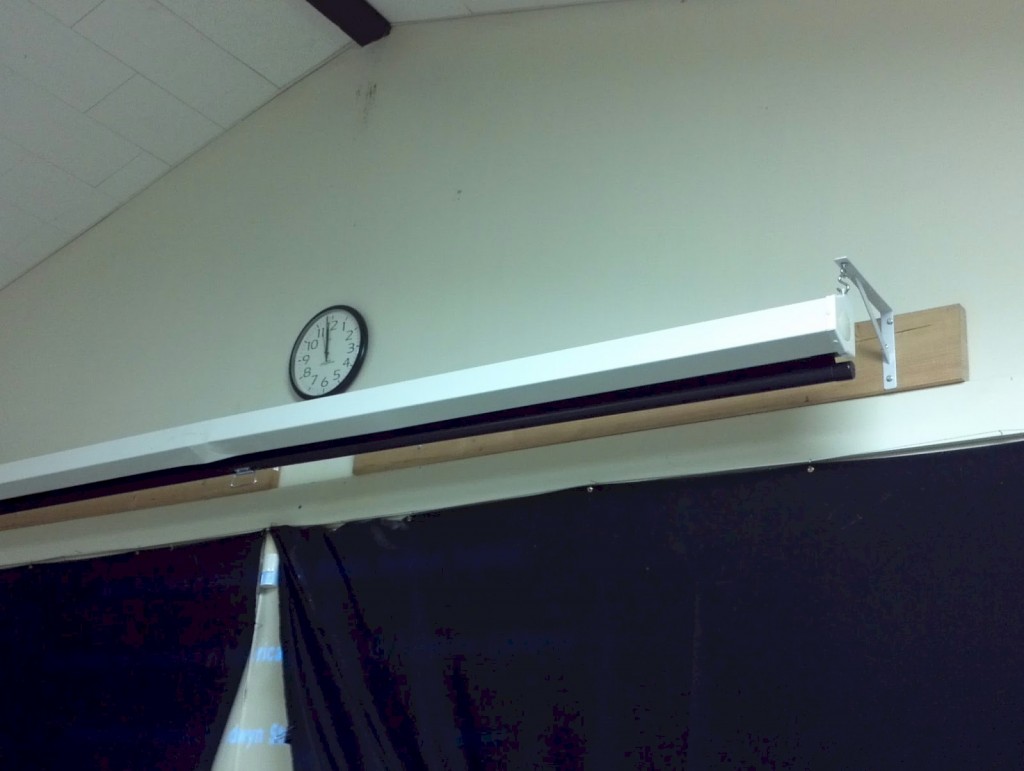 As usual, there was a board meeting scheduled before the general Meeting, which started late due to the installation’s schedule being overly optimistic (it didn’t account for pizza breaks or other such obstacles).  But with strong leadership, all the club business was addressed, decisions were made, and nearly all world problems were nearly solved. (Yes, Dave got his additional budget for the QuickSTARt program!)

Seven thirty PM arrived, and the popcorn started to pop, and the lemonade began to tart.  Teruo Utsumi, who generously donated his Denon/Klipsch sound system for the evening, solved his own technical problem of the receiver overheating. A 24″ fan was placed face down on the unit, cooling the massive heat sink for the duration of the evening. Again, engineering prowess demonstrated.

During social (half) hour, trailers from the upcoming movies were played until eight PM, the official start time of the meeting.  Prez Rob spoke a few introductory words before quickly sitting down, and the Play button was hit.  Only at a 50s-era drive in was Forbidden Planet seen on a bigger screen.  Upon the first film concluding, bio breaks were taken, more corn was popped, then Play was hit once again to bring up Star Wars IV in all its original 70s fx glory.  Han and Leia never looked so good at Houge Park.

The second feature ended around midnight, the room emptied quickly, and cleanup and gate locked by half past.  It was a fun night, we may have to do it again.

And let’s roll the credits:

Everyone Who Showed – Thank You!