It Was Bound To Happen + Sunspots and The Spinning Sun

The Sun and Saturn – It Was Bound To Happen:

Over the 4th of July I got together with old friends and instead of shooting off fireworks – which btw would get you shot in the Klamath woods of the Siskiyou mountains – I offered viewing the distant fireworks of the Sun in H-Alpha. These friends for the most part were oblivious to the hobby of astronomy – some had never seen Saturn in a scope – which was on the agenda for the night.

On the 4th sunspot activity was good with “1x” visible sunspot group – a smear of spots in between two large spots making a of a very good “face on the Sun”. It looked like the face of a fox to some. (I’d really love to hear the conspiracy theories for this fiery crop circle). Anyway plasma was streaming off the solar limb south of this group in spectacular geometries and other prominences could be seen all around the solar disk. All-in-all it was an average H-alpha day for 2012. But to these folks who had never seen the Sun in H-Alpha it was a mind blowing wicked-sick day.  A couple could not take their eyes off the show and needed to know everything.

pNight came and it was Saturn’s turn. Its rings and moon Titan shinning brightly. Seeing was pretty fair and the best view of the planet through a TV85 was @ 150x using a 4mm Radian. Very decent power for CA.. I don’t have to explain to veterans of this hobby the impression Saturn makes to first timers. However the words did flow – “Wow, OMG, Surreal, get-the-heck-out-of-here and holly <insert expletive>.”

But then I heard it. And the comment was entirely reasonable for a 1st timer to say: “Cool but not quite as cool as the Sun.” It was bound to happen. Personally I have never heard anyone compare Saturn to another planet or DSO with any vigor: Mars, NGC4565, nope. Saturn is in a class all by itself. And to be fair, if the view of Saturn was through a Bill Burton’s 12.5″ with a binoviewer at the Florida WSP (think festoons, Encke, 500x) – well the comparison would never leave a person’s lips…

The Spin of the Sun – Sunspots appearing and disappearing off face:

On July 6th SJAA member Malika took two excellent shots of sunspot spinning in to and out view. Below are the cools images – which I rotated and doctored a bit to bring detail.

Click one image. When it pops up you can click on thumbnails below it to advance (go back an forth) between the two and see the sunspot appear/disappear at the top and bottom limb. Nice!!! 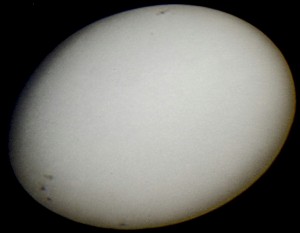 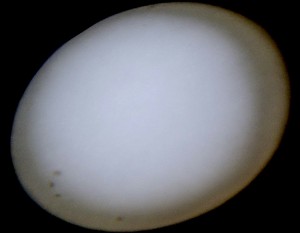