Observe The Sun Safely – Never look at the Sun without a proper filter!
Solar Programs are held 1st Sunday of every Month 2:00-4:00 PM at Houge Park  weather permitting

One of the largest sunspot groups seen in a long while was visible on the Sun today. Below is an image of it coming into view a day earlier – just fantastic for all scopes equipped with a standard solar filter. In solar filtered binoculars it might of looked like two groups but small solar scopes at moderately high power showed tiny sunspots connecting the two larger dark regions. This Sunspot is associated with a large solar flare expected to hit Earth’s Magnetosphere around Friday March 9th.

In all, 5 Sunspot Groups were seen with over 30 individual spots! Let Solar Observing begin folks! Several of these groups were easily seen in an eyepiece projection system 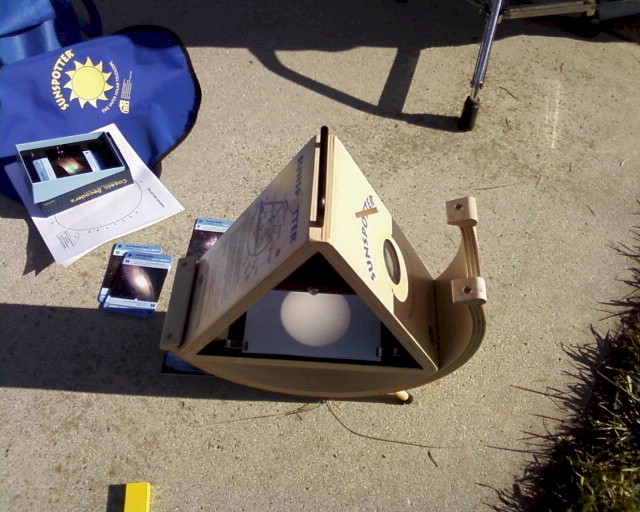 Hydrogen Alpha Views in the club’s New H-Alpha scope showed the usual spiked prominences all around the Sun’s limb with one Earth-sized plasma ejection at 4 O’clock in scopes field of view. 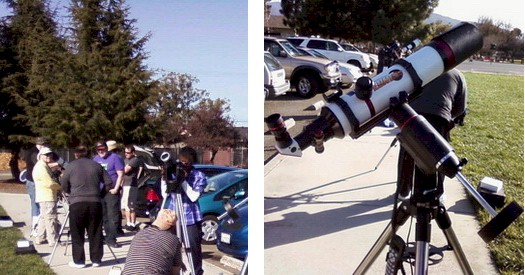 Counting sunspots is not as straightforward as it sounds. Suppose you looked at the Sun through a pair of (properly filtered) low power binoculars – you might be able to see two or three large spots. An observer peering through a high-powered telescope might see 10 or 20. A powerful space-based observatory could see even more – say, 50 to 100. Which is the correct sunspot number?

There are two official sunspot numbers in common use. The first, the daily “Boulder Sunspot Number,” is computed by the NOAA SpaceEnvironment Center using a formula devised by Rudolph Wolf in 1848:

where R is the sunspot number; g is the number of sunspot groups on the solar disk; s is the total number of individual spots in all the groups; and k is a variable scaling factor (usually <1) that accounts for observing conditions and the type of telescope (binoculars, space telescopes, etc.). Scientists combine data from lots of observatories — each with its own k factor — to arrive at a daily value.

pFor example, looking through Ed’s refractor during this months program I saw 5 groups and about 30 individual sunpots. This give a sunspot number of:

The NOAA Solar Spot Number for March 4 was 70. I got the number of groups right but spots that I thought were individual were likely resolved in a larger aperture scope to be connected ie one and the same.

The other official sunspot number in common use is called Wolf number. It’s also known as the International sunspot number, relative sunspot number, or Zürich number. We’ll explore this numbering scheme and the k value in Part 2 but if you want to do some researching on you own check out this pdf.