Below are photos of the historic telescopes of Lowell Observatory , Mars Hill, Flagstaff, Arizona, elevation 7,200 feet, from my visit in June 2013.  The first photo is of the Clark Telescope , a 24” refractor, which Percival Lowell had built in 1896 so that he could study the “canals” on Mars.  The lens was designed by Alvan Clark, the last lens he designed before he retired. 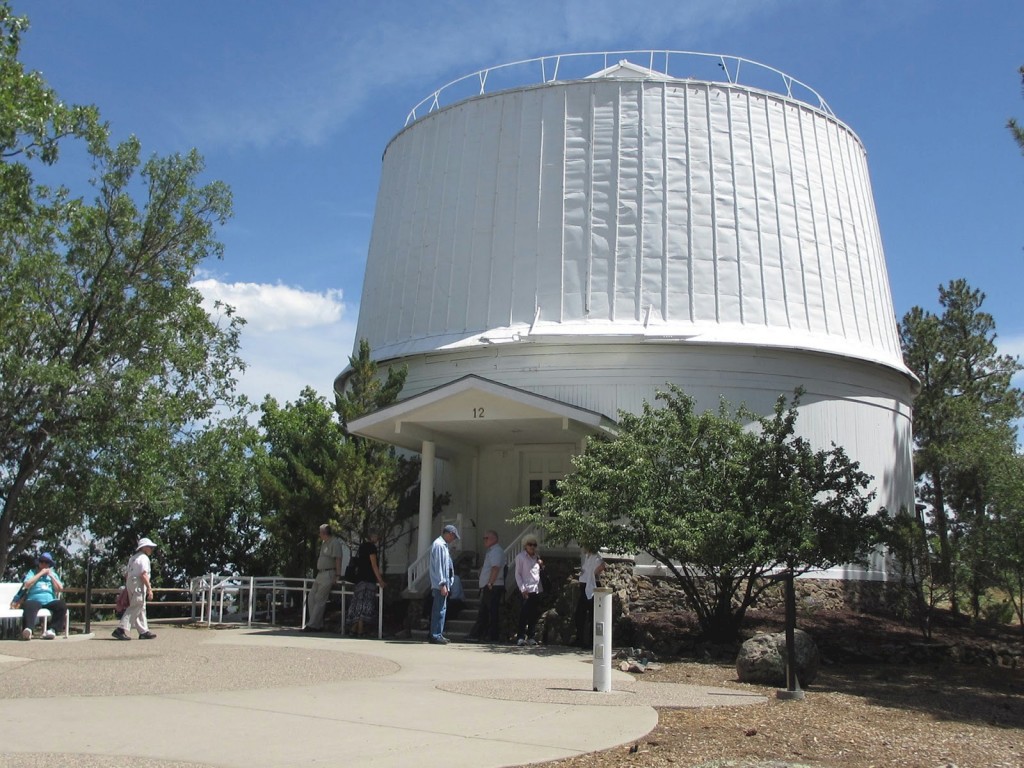 Observe the non-spherical shape of the Clark Dome.  It was built of locally grown ponderosa pine by the Sykes Brothers, bicycle mechanics, who advertised themselves as “Makers and Menders of Anything”.Mars Hill is an easily accessible hill about one mile west of downtown of Flagstaff. 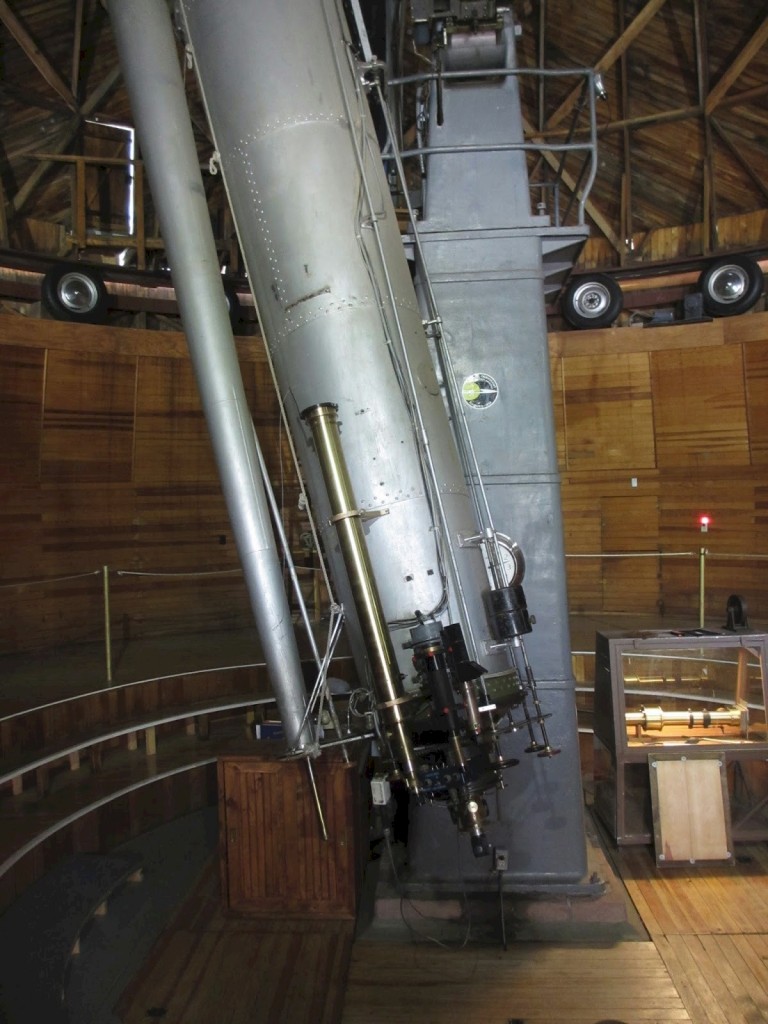 The Clark Telescope is now used only for public outreach.  It is open for daytime tours and, if weather conditions allow, nighttime viewing until 10 PM every summer evening.   The dome rotates on tires, obtained from the Ford Motor Company and installed in 1957, most including hubcaps, replacing the original worn out metal wheels. 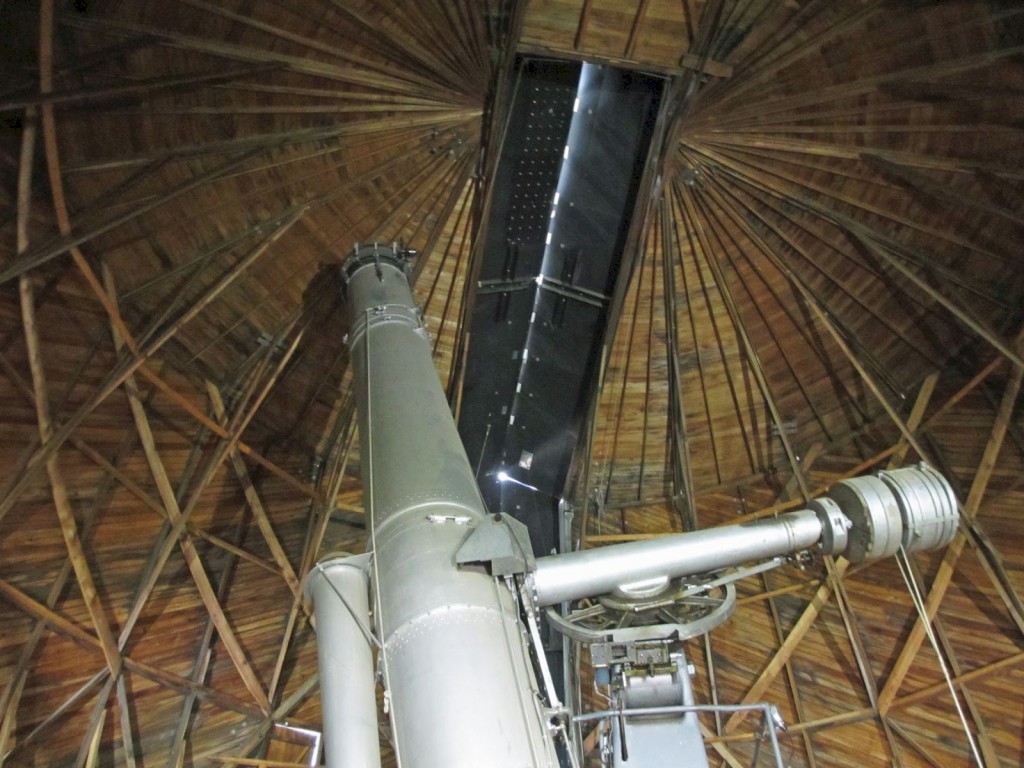 Inside of Clark Dome

The dome is composed of flat planes of wood instead of today’s spherical surfaces.  The roof doors are flat panels that open outward, and turn into sails in high winds, so cannot be opened if the wind exceeds 15 mph.  I did not get to view through the telescope due to the wind.  The lens cover of the large finderscope on the left is a skillet stolen from a good cook’s kitchen. 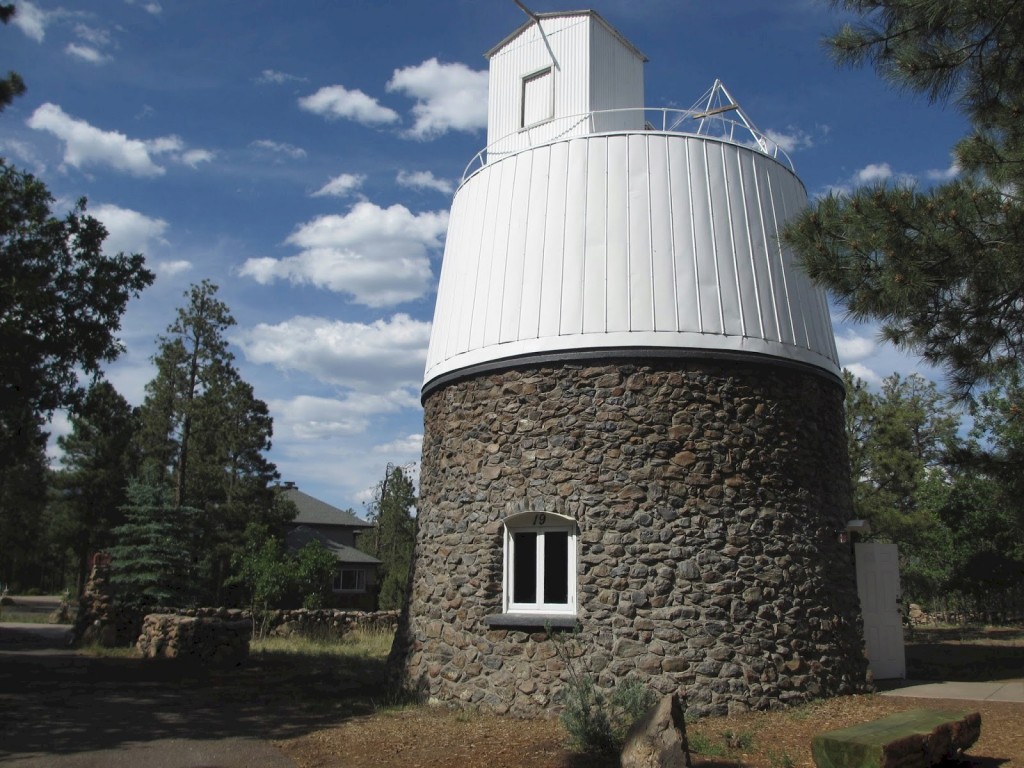 Lowell started searching for “Planet X” in 1905 because he thought an unknown planet changed the orbit of Neptune and Uranus, and he continued this search until his death in 1916.  Once his estate was finally settled, Lowell’s younger brother, A. Lawrence Lowell, president of Harvard University, provided funds to construct the dome and telescope used to continue the search.  It was completed in 1929. 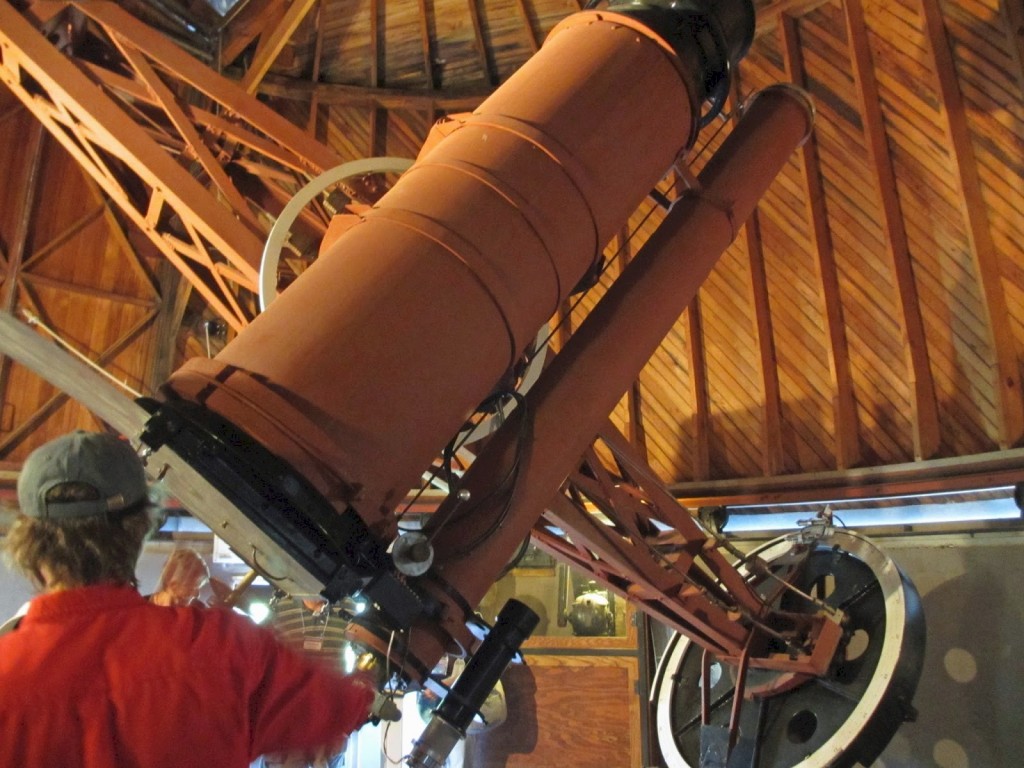 Clyde Tombaugh, a Kansas farm boy who got a job at the Lowell Observatory based on the sketches of planets that he had sent, used this astrograph to find Pluto.  The “Pluto Discovery Telescope” has three 13” lenses and 14” x 17” glass photographic plates.  Clyde took one hour exposures of a portion of the sky, then photographed the same portion six days later, and compared the plates.

The tour guide told us that Clyde used the smaller telescope mounted below the astrograph to manually monitor that the astrograph was accurately tracking the stars during the one hour exposure, and manually nudged the astrograph if it was getting off track.  Clyde had to endure cold temperatures because he captured the view of Pluto in January, the dome was unheated, and the elevation of Mars Hill is 7,200 feet. 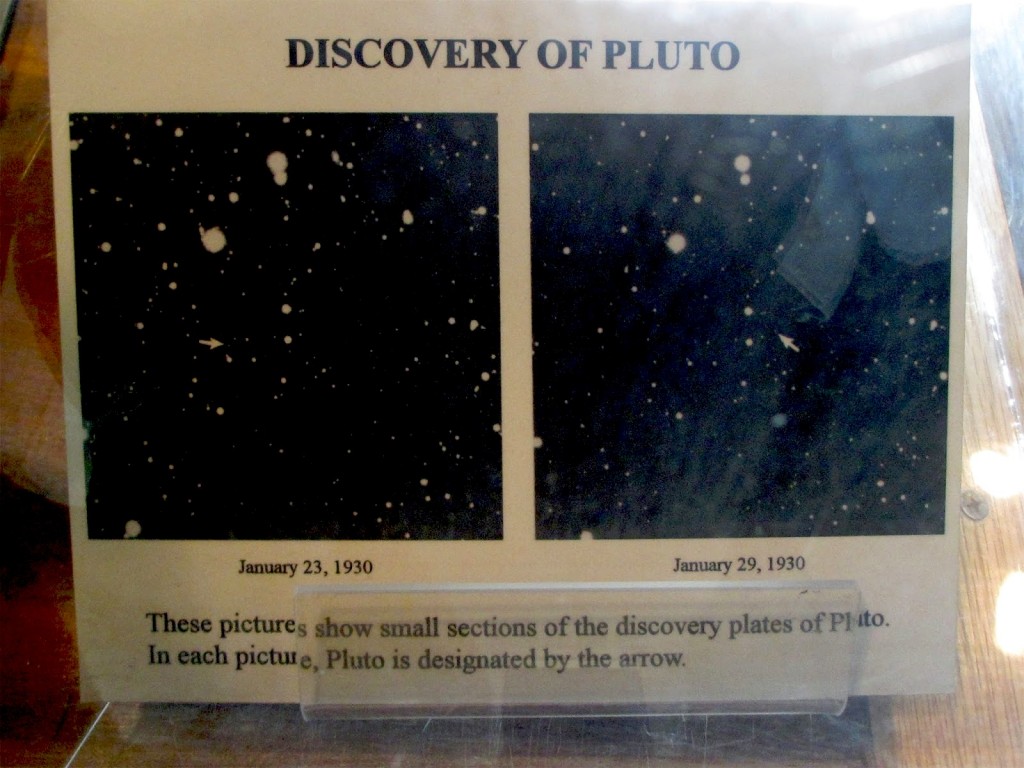 Clyde used the “Zeiss blink comparator” which switches the view between plates for comparison.  Here are replicas of the plates that he used to discover the new planet in his office on February 18, 1930.  It was subsequently named Pluto in homage to Percival Lowell whose initials P.L. are the first two letters in Pluto.  Our tour guide told us, I think tongue in cheek, that in Flagstaff, Pluto is still a planet.

The Lowell Observatory is a non-profit research institution, and it runs several other telescopes which are outside the Flagstaff city limits, including the new $53 million, 4.3 meter Discovery Channel Telescope located 40 miles southeast of Flagstaff.

Even though the “canals” Lowell was observing were optical illusions and not signs of life of Mars and even though later evidence showed that no planet was disturbing the orbits of Neptune and Uranus, he made a substantial contribution to astronomy: