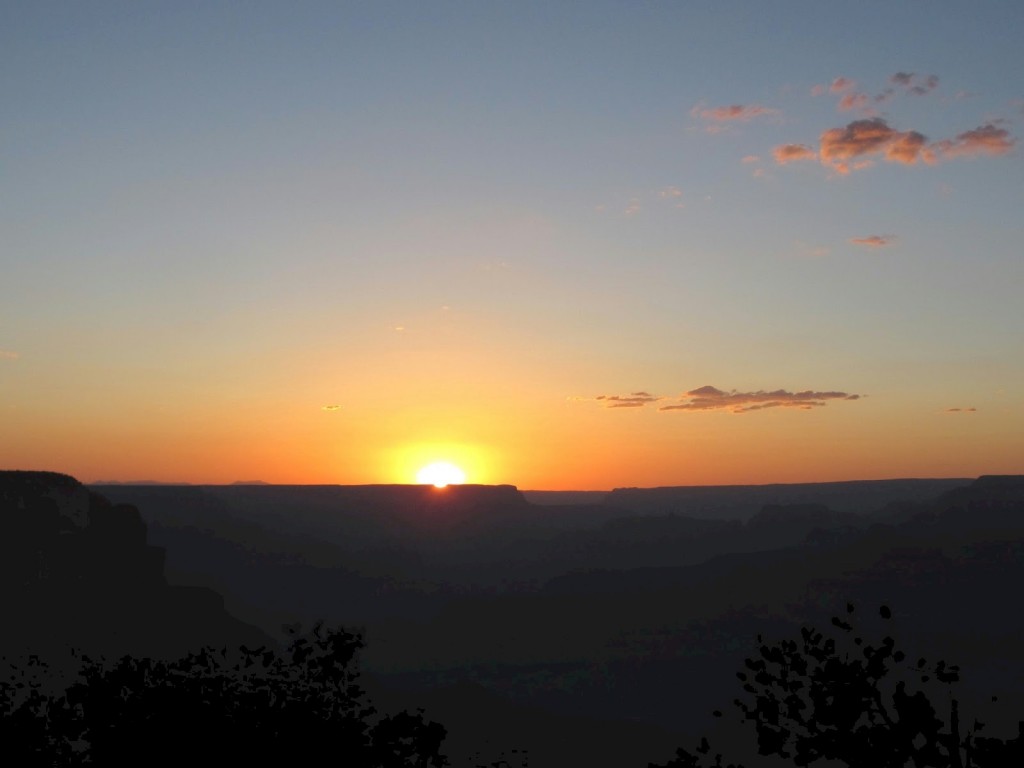 Sunset over Grand Canyon before the Star Party

I expected that the highlight of my June trip to Arizona would be to attend two nights of the 23rd Annual Grand Canyon Star Party at the South Rim.  Just in case of clouds at the party, I packed my 10×50 binoculars, tripod, and camp stool, so I could go northern Arizona star gazing every clear night.  I also knew the moon would have a bigger impact each night.  The Star Party started at New Moon, June 8, 2013, but it lasts 8 days, so the moon would be nearly First Quarter by the time I got to the Star Party.

I was taking a Road Scholar program, an educational tour consisting of astronomy lectures by professors of Northern Arizona University at Flagstaff , field trips to Lowell Observatory and Meteor Crater, and culminating with the Grand Canyon Star Party. (I made separate blog posts for Lowell Observatory and Meteor Crater.) There were a few star gazing enthusiasts like me (one couple drove from Tennessee so they could bring their 8” telescope), but there were also folks from Manhattan and Brooklyn who said they never got to see stars, and just wanted to see some stars. The first night in Flagstaff, elevation around 7000, was cloudy. The next night in Flagstaff was very clear, and I was eager to see the view through the 24” Clark refractor at Lowell Observatory.  But I called and was told that it was so windy that they could not open the Clark dome.

I did the best I could on my own, even without a car. Flagstaff is designated an “International Dark Sky City”, but there were still lots of streetlights around the motel. It is located at the end of a street which dead ends at a little hill with no lights to the north, but lots of street lights on all other sides.  I put up the hood of my sweatshirt, pulled it out as far as I could to block the light from the sides, looked to the north through my binoculars, and, oh my goodness, so many stars!!! Even with all these street lights around me, I could just glance up and see the Coma Berenices Cluster. Walking back to the motel, I could see Scorpius shining brightly, so I decided to try to see globular cluster M4. I thought it would be futile because I was looking straight into the street lights, but I gave it a try. To my delight, with my binoculars I could see M4 very clearly. Flagstaff skies at 7000 feet are so different from Silicon Valley skies.

Then it was on to the South Rim of the Grand Canyon.  The Grand Canyon Star Party began as the first anniversary of Dean and Vicki Ketelsen’s honeymoon there, and telescopes set up by the Canyon proved so popular with tourists, that the event became an annual tradition as a public oriented event.  Skies are typically clear in June at the Grand Canyon whereas monsoon season typically begins later in the summer.  Arizona does not observe Daylight Savings Time, so skies get dark earlier in the evening at the Grand Canyon than in Silicon Valley.  The Tucson Amateur Astronomy Association hosts the Star Party on the South Rim and the Saguaro Astronomy Club based in Phoenix hosts the Star Party on the North Rim. 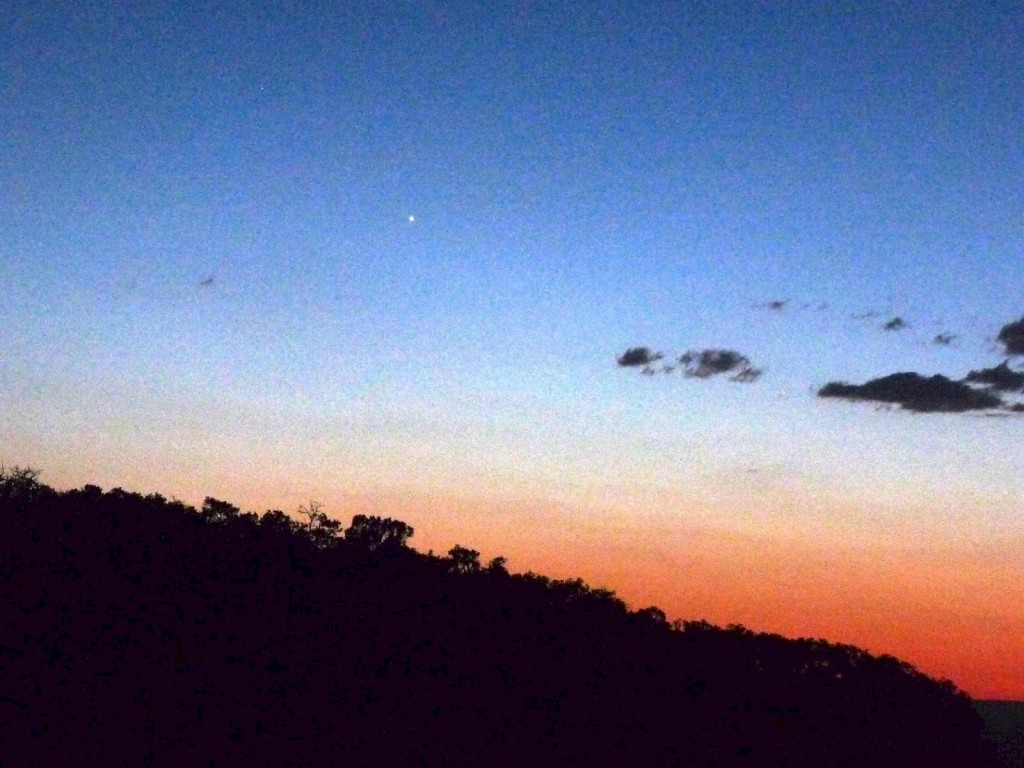 Mercury and Venus over Grand Canyon

I took this photo of Venus and Mercury above the Grand Canyon from Mather Point. Mercury is barely visible at a 45 degree angle to the left and above Venus. I photographed this scene over and over as the sky darkened. People asked me what I was doing, and I got to point out Mercury to many people who had never seen it before. Using Venus as a guide, everyone was eventually able to spot it.

Sitting with my binoculars at Mather Point watching the canyon darken and the stars come out was absolutely the highlight of my trip.  The moon was out, and I could see my shadow clearly, so I felt no fear that I would accidentally fall into the canyon.

Also there are big strong metal railings at Mather Point.  By all the green laser lights pointed to the sky, I could see that the Star Party had begun, but I did not want to leave the glorious vista of horizon to horizon bright stars above and the moonlit canyon below with only one small light at Phantom Ranch  It was hard to do, but eventually I pulled myself away from the canyon and walked in the moonlight and the light of my flashlight to the Star Party.  By the time I got there, the crowds had thinned, and I got to see fabulous views through the big telescopes.

The night was very short so close to Summer Solstice, and I didn’t get up in time to see the sunrise.  The South Rim gets quite hot by midday, so I was up hiking a little ways down the Bright Angel Trail before breakfast and before the sun got very high. 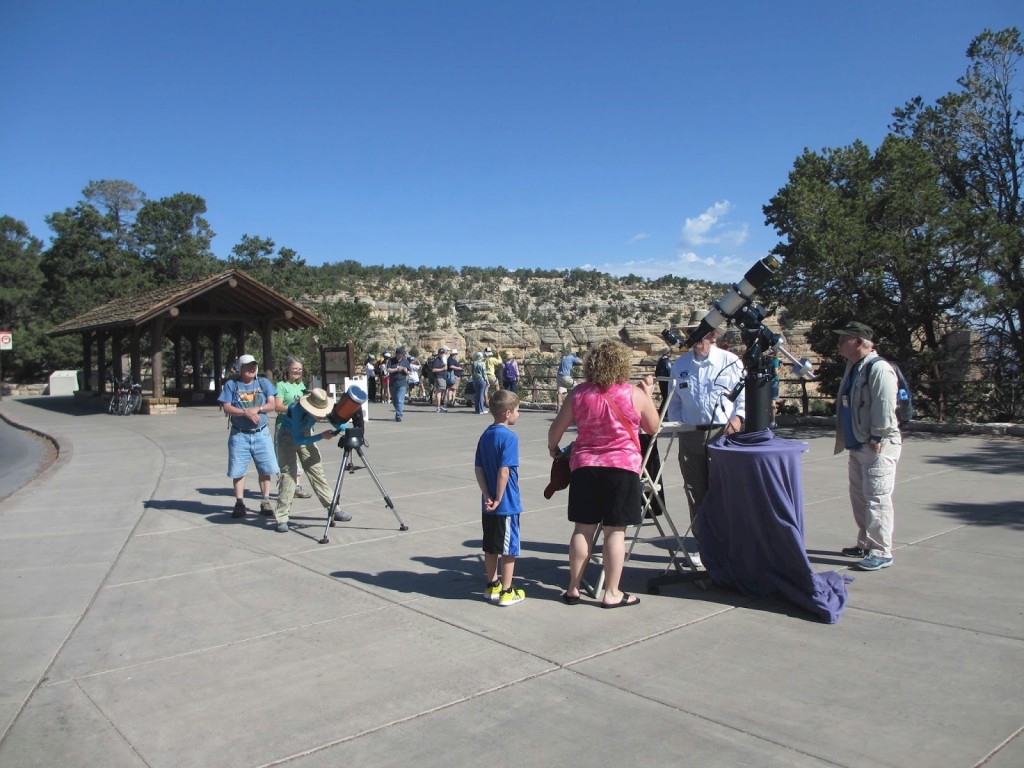 Members of the Tucson AAA set up for solar viewing right on the South Rim between the shuttle bus stop and the Bright Angel Trail head.  I got to see solar prominences, but no sun spots. 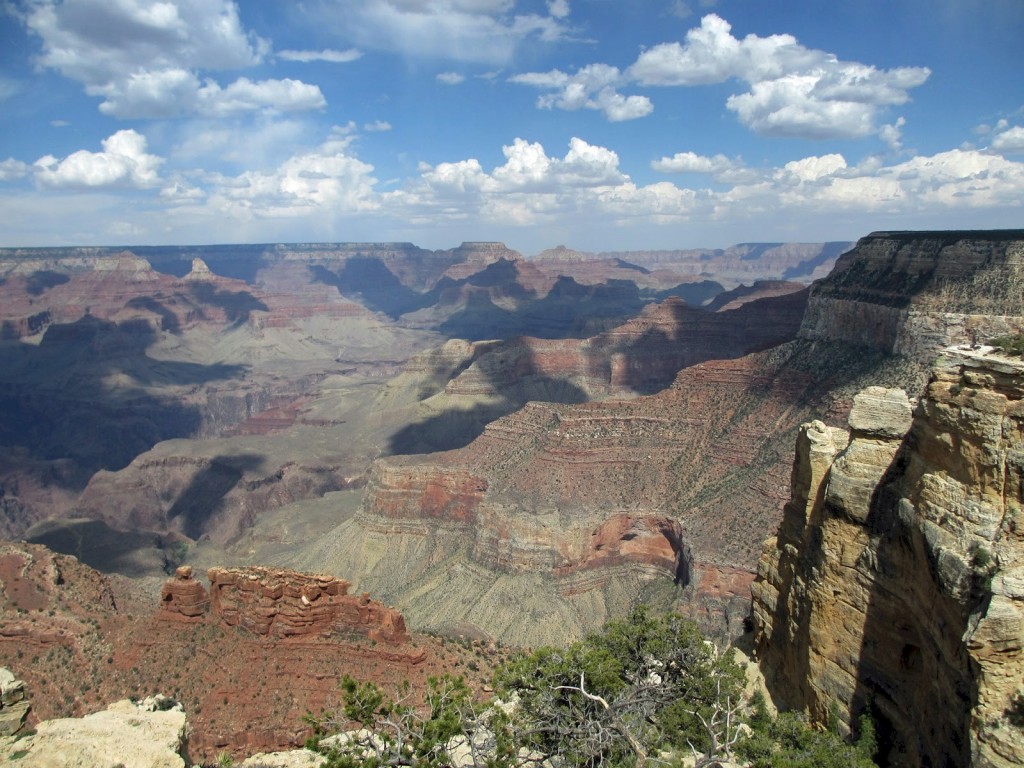 View of Grand Canyon from Powell Point on Hermit Road

The weather was beautiful, and the daytime sightseeing spectacular, especially strolling along the Rim Trail and enjoying many viewpoints along Hermits Road.  Not having a car was no problem due to the excellent free shuttle buses.  Then it was time for the second night of star gazing at the Grand Canyon Star Party. 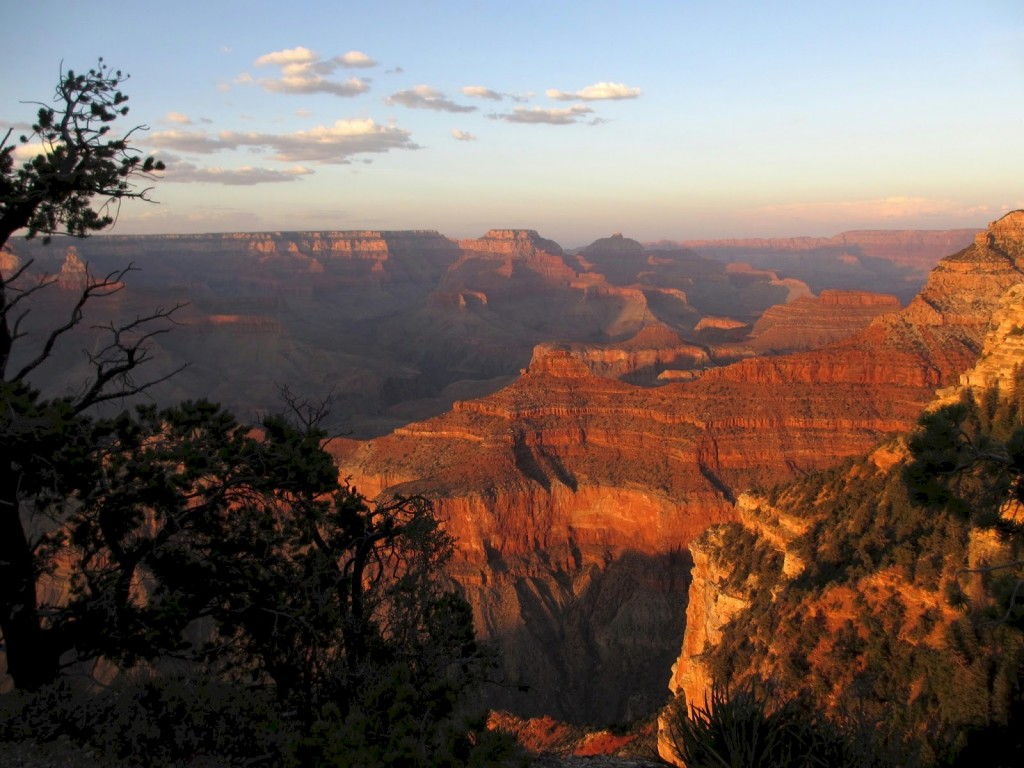 View of Canyon at sunset from Yavapai Point

A group of Road Scholars skipped the ranger talk to photograph the sunset from Yavapai Point. 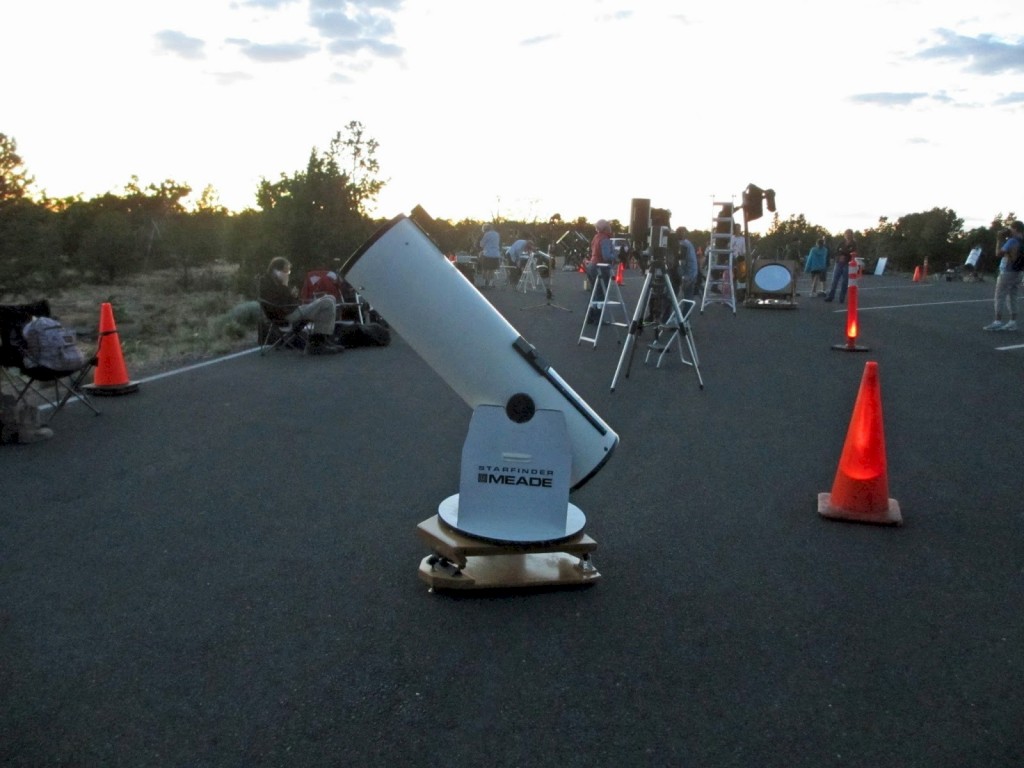 The amateur astronomers set up their telescopes in the employee parking lot at the Grand Canyon Visitor Center at Mather Point. The area is several hundred feet from the rim, so there is no danger of anyone falling into the canyon. As recently as last summer they had set up their telescopes at Yavapai Point, but that had the big disadvantage that the shuttle buses came by every 15 minutes, spoiling everyone’s night vision each time.

I was very impressed with the large reflecting telescope whose mirror you can see to the right of the tall ladder.  The view of the M13 globular cluster from that telescope was fantastic!  To me it looked just like the photo of M13 in my star gazing app. 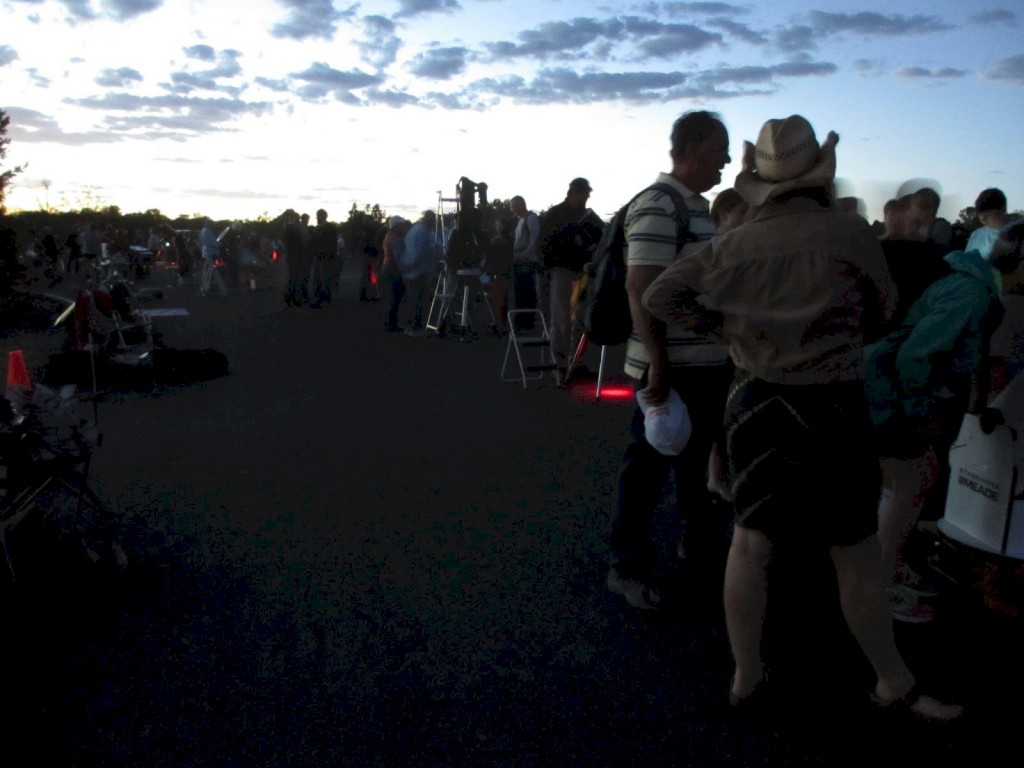 In this photo the ranger talk was just over, the crowds were arriving, and Star Party had just begun. I took this photo with ISO 1600, exposure time 1 sec, so the scene appears light, but it was actually quite dark, and the astronomers were sharing very good views of Mercury and Saturn.  I estimate there were forty telescopes, mostly set up by amateur astronomers from Tucson, although I spoke to one who made an almost annual trip from Texas.  At first the crowds were heavy, and the lines at the telescopes were quite long, but they thinned out after 10 PM. The evening also included a bright Iridiuim flare, a very nice pass by the International Space Station, and hourly green laser Constellation Shows, all announced ahead of time by the astronomers.

I had a wonderful time, and I especially loved sitting at Mather Point watching Mercury and Venus sink while the canyon got dark and the stars appeared. One thing that I missed was watching the Milky Way rise over the canyon.  I would like to go back in the dark of the moon so I could see that.